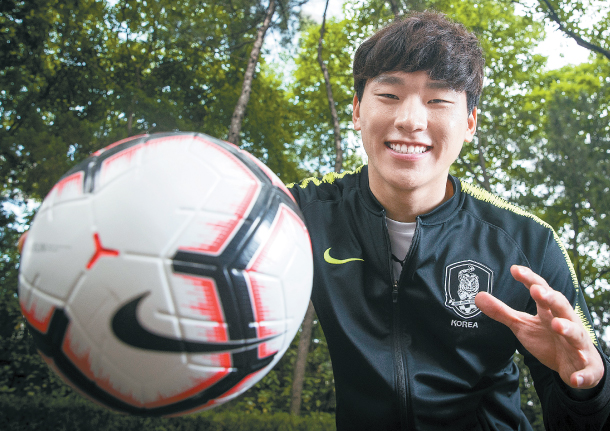 Korea’s U-20 national football team goalkeeper Lee Gwang-yeon poses for a photo at a park in Jung district in Seoul on Tuesday. [JANG JIN-YOUNG]

In 2018, it was goalkeeper Jo Hyeon-woo who made headlines for his super saves at the FIFA World Cup in Russia. This year, goalkeeper Lee Gwang-yeon continued the streak of Korean goalkeepers’ success at the FIFA U-20 World Cup.

Lee Kang-in may have walked away from Korea’s historic runner-up finish at the FIFA U-20 World Cup as the biggest star, but goalkeeper Lee Gwang-yeon has also become a household name for the first time in his career.

“In June last year, I watched the Russia World Cup from our dorm room in Incheon University, eating chicken,” Lee Gwang-yeon said. “When I watched the match against Germany, I thought [Jo] made great saves and that Korean football is amazing.”

Normally, goalkeepers don’t receive much attention during a tournament but Lee was a different story as he played a big role in helping the U-20 team advance all the way to the final.

Throughout the FIFA U-20 World Cup, Lee made a number of super saves. It wasn’t all great skill, he also had some luck - during the round of 16 match against Japan, a crucial shot in the 88th minute hit the post.

“In every match, I touch the goalpost and ask it to protect me,” Lee said. “It actually felt like the goalpost saved me.”

Then, in the quarterfinal game against Senegal, Korea clinched the semifinal spot by winning 3-2 in the penalty shoot-out. As the shoot-out is a one-on-one matchup between the kicker and goalkeeper, Lee received a lot of attention. The shot of Senegal’s last kicker, Cavin Diagne, went over the bar, putting Korea through to the semifinals.

“In penalty shootout, kickers get more pressure than goalkeepers,” Lee said. “So I intentionally tried to make eye contact and smiled. Since the last kicker walked up to the pitch with his head down, I felt that I could block [the shot].”

Lee’s form continued in the semis, blocking a header from Ecuador in stoppage time to lead Korea to the final.

“I saw the opponent twisting his head so I think my body just reacted to that,” Lee said. “When I watched the clip after the match, I got shivers because I was also shocked by how I made such a save. I think I was able to make the save because our players, coaches and fans all wanted it.”

Even after the final whistle was blown in the match against Ecuador, Lee still dove to the ground to top a loose ball going into his goal. His concentration and tenacity left quite an impression on the fans.

“I heard a whistle but I didn’t know that it was the game-ending whistle,” Lee said. “Since there were a lot of VAR [video assistant referee] decisions, I told myself not to lose focus until the very end.”

Unfortunately, Lee’s wasn’t able to keep up his dominant streak in the finals as Korea lost 3-1 to Ukraine. Following the match, he was spotted crying on the pitch but the tears weren’t from disappointment that Korea failed to win the title.

“The moment I heard our coach say ‘great job over the three years,’ I got emotional,” Lee said. “[Lee] Kang-in also told me that I’ve done a great job and that we should walk up to the podium smiling.”

Before each match, Lee has his own routine. When he puts on his football boots, he always puts the left boot on first, but he puts on his shorts with the right leg first. After the first half, he changes his uniform.

“That routine started in high school,” Lee said. “[I did the same] at this tournament and saw good results. So I did that throughout the entire tournament.”

When Lee first began playing football he was a fullback. But on the recommendation of his coach in the fifth grade, he switched to goalkeeper.

“At first, I was just happy to get some new equipment [his goalkeeper’s gloves],” Lee said. “But once I started playing, it was a thrilling position to be in.”

Since becoming a goalkeeper in fifth grade, Lee continued his career in that position and turned pro this year, joining Gangwon FC. Yet he has yet to make his debut.

Lee believes that he has made it this far in his career through hard work.