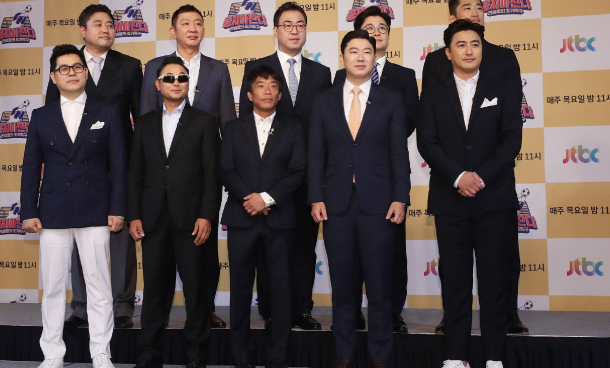 On the program, Korea’s former top athletes from eight different sports train together as one football team under the coaching of 2002 World Cup star Ahn Jung-hwan.

Ahead of the show’s second episode, Ahn and a few team members attended a press briefing on Tuesday to talk about the team’s journey so far. In the first episode, which aired last week, the Eojjeoda team struggled in its first match, losing to a local amateur team 0-11.

“I think the athletes haven’t gotten a chance to try new things because they were too focused on a specific discipline,” said Ahn. “I’ll try my best to help them all become better players.”

Despite their unfamiliarity with football, the athletes’ impressive physical abilities still stand out, according to Kim Sung-joo.

“Yeo Hong-chul has tremendous jumping skills,” he said. “Lee Bong-ju runs like he has four hearts.”

Given the seniority of the team, whose average age comes to around 49, the show has been attracting a lot of interest from older viewers. According to viewership data provider TNMS, people in their 40s made up the largest viewer demographic for the first episode.

“The Gentlemen’s League” airs every Thursday at 11 p.m. on JTBC. The show is currently accepting applications from local amateurs who want to play against the star-studded team on the show’s website.