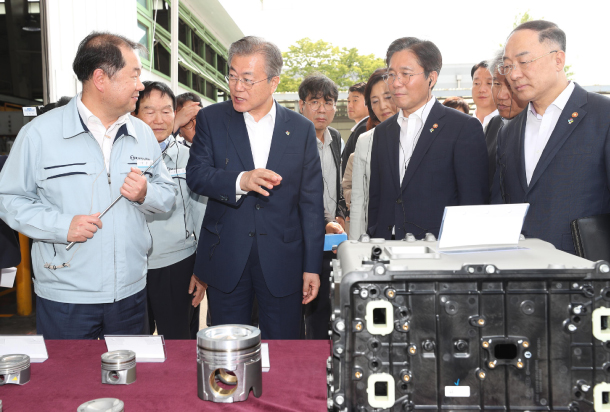 President Moon Jae-in listens to a representative of Dong Yang Piston at its headquarters in Ansan, Gyeonggi, on Wednesday. Moon visited the site after announcing a 2030 vision for a manufacturing “renaissance.” [THE BLUE HOUSE]

The government on Wednesday announced a visionary plan to turn Korea into one of the top four manufacturing nations in the world and raise gross national income per capita to $40,000 by overhauling Korea’s factory base.

“The revival of the manufacturing industry is the revival of [Korea’s] economy,” President Moon Jae-in said on Wednesday during a ceremony at the Smart Manufacturing Innovation Center in Gyeonggi.

He announced a 2030 vision he dubbed a “manufacturing industry renaissance” that will rely on smart, environmentally friendly technologies.

“Our manufacturing industry is at an important crossroads and has to decide whether to make a new leap or remain at a standstill,” Moon said. “The catch-up strategy of the past is no longer a solution for our economy and we’re at an inflective point where we need to change to an innovative industrial structure.”

“In fact, we haven’t been able to create a new industry since memory semiconductors,” Moon said. “In the last 10 years, our 10 leading industries have not changed, while China, which once was a country that was catching up to us, has now surpassed us.”

Moon said even in an era of the so-called fourth industrial revolution, manufacturing has an over-dominant place in Korea’s economy.

He said without the accumulated experience and technology that “Made in Korea” has given the country as a foundation, it would be difficult for innovation to flourish.

“We will boldly change the industrial paradigm where the industrial ecosystem will be accumulative and challenging instead of avoiding risks,” Moon said. “Our investment strategy will be changed from capital investments to investing in talents and technologies.”

One of the main ideas of the government plan is expanding the use of smart technologies on productions lines.

The government plans on raising the number of smart factories controlled by SMEs by 30,000 by 2020 and creating 20 smart industrial clusters by 2030.

As of last year, 7,903 companies with more than 10 employees have smart factories.

The plan also includes setting up a data center that would provide artificial intelligence services from information collected from smart factories.

This includes investing 385.6 billion won ($327.9 million) between 2020 and 2025 in research and development for electric cars and hydrogen fuel cell vehicles.

Factories that emit large amounts of pollution like steel plants and manufacturers involved in casting, molding and welding will be urged to adopt “clean” factory systems.

The government also plans to encourage the integration of different industries.

For this to work, the government said it will adopt regulation-free zones and regulatory sandboxes so new areas of business can be launched.

The government said it will encourage, in particular, the development and launch of non-memory semiconductor factories, advanced cars and biopharmaceutical businesses.

The government also said it will expand the 1 trillion won corporate structural innovation fund to 5 trillion won while creating a fund exclusively investing in traditional manufacturing industries like automobiles and ships if needed.

And to help companies expand overseas, the government will raise its trade credit insurance, currently at 1.5 trillion won, to the level of such advanced economies as Germany (which has a $3.3 billion fund), China ($5.5 billion) and Japan ($7.2 billion).

Business groups welcomed the vision laid out by the government.

The Korea International Trade Association released a statement saying it expects the government strategy of building AI factories and fostering future cars, non-memory chips and the biopharmaceutical industry will contribute to innovative growth and raise Korea’s competitiveness on the global market.

There have been growing concerns about Korea’s manufacturing sector.

While the automotive and shipping industries have seen some improvement lately, the semiconductor industry is struggling, particularly with the value of DRAM chips falling.

The manufacturing sector has been losing jobs for 14 consecutive months.