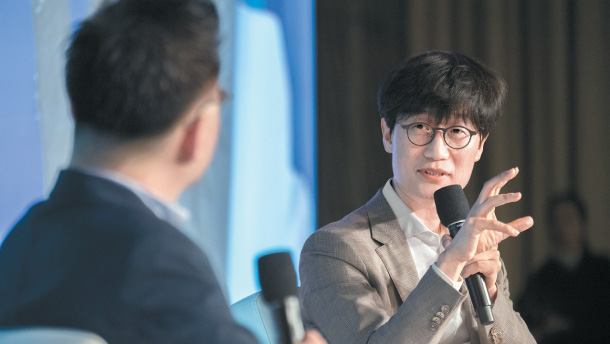 He said not to call him “owner,” scoffing at the notion that someone with such a small shareholding could be burdened with that title. He took aim at Google, vowing to fight technological imperialism to the end.

He also took a shot at corporate social responsibility.

“It’s too much to ask tractor companies to solve even the unemployment of farmers,” said Lee Hae-jin, the founder of Naver and the company’s global investment officer (GIO).

He stated in no uncertain terms that he opposes social requests that could burden innovative companies. It is too burdensome for tractor companies to take responsibility for farmers when the companies are struggling in a competitive market, he noted.

He made the comments Tuesday at a Korean Sociological Association and Korean Academic Society of Business Administration joint symposium at the Four Seasons Hotel located in Jongno District, central Seoul.

“Companies must be focused on ways to succeed in a competitive market, and I hope that others, those in social organizations, politics and academia, share the responsibilities.”

He also expressed concern over public wariness about the rapid growth of IT companies, including Naver.

“Although it is known that Naver’s sales total more than 5 trillion won ($4.25 billion), it is not that big when compared to global standards,” said Lee. “It is undesirable to consider a company’s growth as something immoral.”

He added that Korea regulates and controls companies by characterizing large companies as greedy.

“In China, a great number of unlisted company worth trillions of won are pouring in every hour,” said Lee. “Looking at Korea’s case separately can result in poor judgement.”

Lee also noted that he is uncomfortable about Naver being considered a general conglomerate.

“It is completely sad to see expressions like ‘owner’ when I have worked with the employees for decades,” said Lee. “I believe that Naver is a new model for governance and transparency.”

He also said that he had never thought even once in his life that Naver was his own company.

“I own only 3 percent of the company’s shares, so the system does not allow me to make a decision by myself.”

The Fair Trade Commission (FTC) in September 2017 included Naver on the chaebol list, which requires additional disclosures be made. At the time, Lee owned 4 percent of the shares.

The FTC designated him as Naver’s effective leader, or “owner” as it is referred to in Korea, with overwhelming control over the firm. In February last year, he sold 195,000 shares, lowered his overall stake and tried to make Naver an “ownerless” large corporation.

The FTC maintains its designation.

Regarding global competitors like Google, he didn’t hold back.

“A search engine service pursues diversity, and I want Naver to be a company that has resisted the imperialism of global giants to the end, and survived to the last,” said Lee.

That is why Naver is actively entering the European market, where diversity is important. On criticisms that Naver is monopolizing the portal service in Korea, he said that those comments are hurtful.

Yet he added that he thinks it is meaningful that Korea has other search engines other than Google.

“If a bigger company than Naver is established, we can call it a big success,” said Lee.