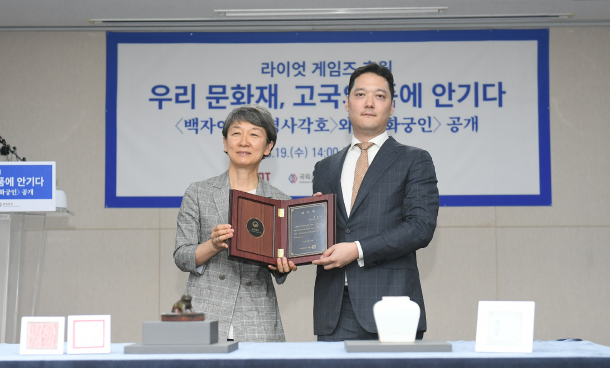 Chung Jae-suk, chief of the Cultural Heritage Administration, left, hands a plaque of appreciation to Park Jun-kyu, Korea’s country manager of video game developer Riot Games, on Wednesday at the National Palace Museum of Korea. Two royal artifacts of the Joseon Dynasty (1392-1910) - a rectangular white porcelain of the 19th century with writing titled “Yidonggung” and the royal seal of Junghwagung - were able to return home recently thanks to donations from Riot Games. According to the Overseas Korean Cultural Heritage Foundation, the two artifacts, which were thought to have been lost, were recently on the list of items to be shown at an auction in New York. The organization requested the auction to be stopped, successfully purchased the two artifacts and brought them back home. [CULTURAL HERITAGE ADMINISTRATION]