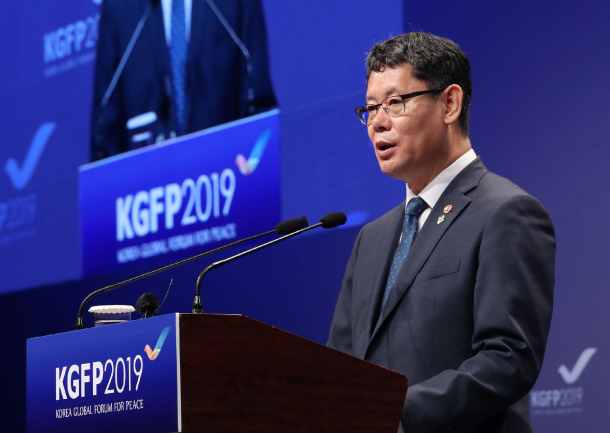 South Korean Unification Minister Kim Yeon-chul on Wednesday said both North Korea and the United States were preparing new proposals for another round of dialogue at a third summit.

The remark by Seoul’s top official on inter-Korean relations came in response to a question on the protracted stalemate in denuclearization negotiations between Pyongyang and Washington after his keynote address at the annual Korea Global Forum for Peace in Seoul, which was hosted by the Unification Ministry.

In his speech, Kim cited the successes of the top-down approach to dialogue that made last year’s flurry of summits possible, but also stressed the necessity of working-level talks to advance progress on the North’s denuclearization.

“Now, we must work to ensure that a third U.S.-North Korea summit can kick-start the implementation of a denuclearization and peace process, which can only be built through dialogue that strengthens mutual trust and pushes us closer to […] building peace,” Kim said. “A protracted lull in talks is not desirable.”

The minister referenced an address made by South Korean President Moon Jae-in at the Oslo Forum last week, in which Moon said Seoul would work toward building a kind of peace that could benefit the people on a practical level.

Helping families divided across the border meet their relatives, turning the heavily fortified demilitarized zone into a tourist attraction and inter-Korean cooperation in the fields of medicine and forestry were all listed as examples that could foster a virtuous cycle toward peace, Kim added.

Kim also addressed the government’s motives behind the $8 million aid package and 50,000 tons of rice it donated this month to international organizations in response to food insecurity in the North.

“The people of the North are those with whom we must live together,” he said. “Humanitarian aid is not simply a one-sided handout, but an investment that embodies a promise to cooperate.”

Only by extending the vision of an “inclusive society” to the entirety of the Korean Peninsula can “peace by the people” become “peace for the people,” Kim said.

In a question-and-answer session following his speech, the minister stressed that a new series of summits in Northeast Asia - Chinese President Xi Jinping’s visit to the North today, the U.S.-China summit expected on the sidelines of the Group of 20 summit in Osaka, Japan, and the South Korea-U.S. summit later this month - all have the objective of building an environment that could foster another summit between Pyongyang and Washington.

The United States and the North were building on their respective assessments of their earlier summits at Singapore last June and Hanoi, Vietnam, in February to ready new approaches to dialogue, according to Kim.

“In that respect, it is important to devote some time to narrowing down technical sticking points, but the most important thing is to restart [working-level] dialogue quickly,” Kim said. “Through that discussion process, [the two sides] should work towards identifying their points of agreement and reducing their differences.”

Both Kim and President Moon’s mentions of the importance of working-level talks testifies to observations made by many analysts that the United States and North Korea’s failure to reach an agreement in Hanoi was precipitated by a lack of progress in their preparatory working-level talks.