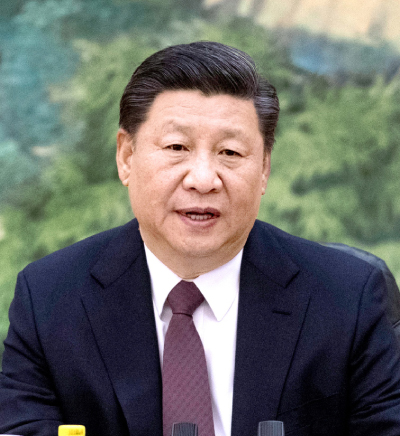 Chinese President Xi Jinping pledged to work for peace on the Korean Peninsula in an op-ed piece carried on the front page of North Korea’s state-run Rodong Sinmun Wednesday.

Xi’s op-ed ran a day before the Chinese leader was set to carry out his first state visit to Pyongyang today and tomorrow, and was considered a rare tribute to a visiting foreign leader.

Xi wrote that the “international society has universally acknowledged that this is a historic opportunity not easy to come by to resolve Korean Peninsula issue,” and thanked North Korean leader Kim Jong-un for “making the right decision,” which has led to a “trend of peace and dialogue” on the peninsula.

His remarks were a nod to ongoing but stalled denuclearization negotiations between North Korea and the United States.

Xi wrote, “We will strengthen communication and coordination with North Korea and other relevant parties to make progress in dialogue and negotiations on Korean Peninsula issues in order to actively contribute to regional peace, stability, development and prosperity.”

China will “hold hands” with North Korea, Xi wrote, and “work toward to plan out a grand plan for the permanent stability of the region.”

He added that “through strengthening communication and dialogue, and mediation and cooperation, a new condition for regional peace and stability will be pioneered.”

Kim has made four visits to China starting with a surprise meeting with Xi in March 2018, which kicked off a year of overseas diplomacy for the young leader, including the first North-U.S. summit in Singapore that June. After succeeding his father Kim Jong-il in December 2010, the Swiss-educated son didn’t leave his country until his train ride to China last year.

Kim and Xi held their fourth summit in Beijing in January, ahead of the second North-U.S. summit in Vietnam the following month that ended with no deal, leading to the current impasse in denuclearization negotiations.

Xi also wrote that through his joint efforts with Kim, a “new historic starting point” is possible for the two nations as they mark the 70th anniversary of the establishment of diplomatic ties this year.

He underscored the Chinese Communist Party and the government’s steadfast and “unchanging” position that it will continue to develop its traditionally friendly relations with its “good neighbor.”

Xi emphasized China’s “firm support” for Kim Jong-un’s plans to lead his country to onto a “new strategic path to concentrate on economic development and improve the livelihood of his people.”

Lu Kang, spokesman for the Chinese Foreign Ministry, said in a briefing Tuesday that Kim and Xi’s talks “will review the progress in relations over the past seven decades and chart the course for future bilateral relationship in the new era.”

He added that the two leaders “will talk about domestic development and further exchange views on the [Korean] Peninsula situation to work for new progress in its political settlement.”

“The Korean government looks forward to President Xi Jinping’s visit to North Korea contributing to the complete denuclearization and the establishment of permanent peace on the Korean Peninsula,” the South Korean Ministry of Foreign Affairs spokesman said through a statement Wednesday.

Xi and U.S. President Donald Trump also held a phone conversation Tuesday, ahead of a planned meeting on the sidelines of the G-20 summit in Osaka, Japan, on June 28 and 29.

Trump tweeted later Tuesday that he had a “very good telephone conversation” with Xi and revealed they will be having “an extended meeting next week at the G-20 in Japan” and that their negotiating teams will begin talks ahead of the summit.

“I think that is working out pretty much as I anticipated it would,” Trump told reporters in Washington about his phone conversation with Xi. “China very much wants to discuss the future, and so do we.”

He added, “So the relationship with President Xi is a very good one.”