[BEHIND THE BEATS] With his work, Swings opens doors

[BEHIND THE BEATS] With his work, Swings opens doors 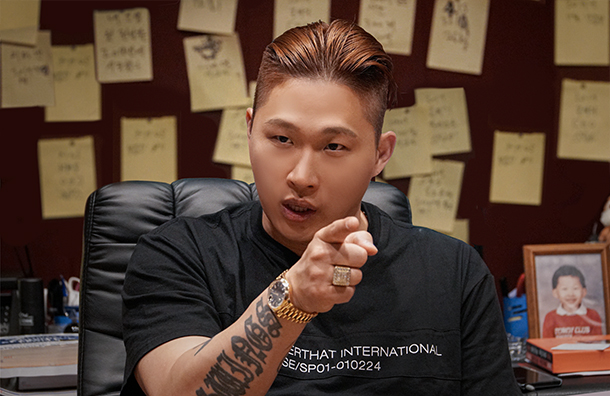 Like anyone else in the entertainment industry, hip-hop artists need a reliable company to back them up and provide them with support and care so that they can concentrate solely on realizing their full potential. And who better to understand rappers than a rapper himself, someone who has witnessed firsthand the Korean hip-hop scene go from its humble beginnings in underground clubs to becoming one of the most popular genres of this day?

Artist and entrepreneur Swings is one of the industry’s most powerful figures. The hip-hop headhunter has helped shape the Korean hip-hop scene not only with his own rap talents, but also through his ability to find and nurture new talent. Having started out as a rapper in 2007, he has since then founded three hip-hop labels (Just Music, Indigo Music and Wedaplugg), opened a pizza joint named Phoenix Pizza, two fitness gyms and wrote a book, all while juggling his career as one of the most well-known rappers in Korea.

Before opening up his first label in 2014, Swings made his name as a rapper for two major reasons: introducing clever punch lines into his lyrics and turning a very rigid Korean hip-hop environment into the more open community that we see today.

Every line of his famed song “Spit a Punchline” (2008) is filled with similes and metaphors that were not frequently seen in Korean rap prior, and he has since employed a variety of literary techniques in his lyrics that other rappers have followed.

While it may have seemed like rappers just speaking badly about each other to outsiders, the “Control” war is said to have opened up the possibility of becoming a rapper to anyone with the right skills to join in the game.

“I like to inspire people,” said Swings. “I like to give what I’ve got. And inspiring the people around me gives me joy. Even people that I don’t know. That’s what helps.”

Swings recently released what’s called an album, but it is not exactly that. Titled “Affirmations From Swings,” the project contains three works - which are also not necessarily music - that are each 15-minute long tracks in which Swings doesn’t sing or rap, but tells the listeners what they should be telling themselves. “I’m a person with great potential. I can do anything. My concentration is amazing. I earn trillions. I am brave” and so on.

In an interview with the Korea JoongAng Daily, Swings talked about his past and present as a rapper and how he keeps himself in check. The following are edited excerpts from the interview.


Q. Your most recent album is quite unique. It’s not necessarily music, so how did you come up with the idea?

A. The album that I released, there are only three tracks [on] the album. It wasn’t music, they’re positive affirmations. In Korea, we don’t really do that a lot. I wanted to introduce our people to the culture, to the practice.

The world sends us so many messages. “You’re not perfect,” “You have to lose a lot of weight,” “You have to be good-looking,” “You have to wear this, buy that, drink that.” Everybody’s trying to send us a bunch of commercials. Everybody’s trying to advertise towards us, but the thing is, most of the time, we live life as if we were half-asleep. So we’re not [telling] ourselves what we need to hear. So it’s important to keep on telling yourself that you’re doing good - you’re doing great, actually.

When did you begin your affirmations?

About 15-16 years ago, I used to have this serious problem. I don’t know how to define it exactly, because I’m not a doctor. But, the doctors that I used to visit, they called it obsessive-compulsive disorder. What happens is, you just kind of hear a bunch of voices - not necessarily voices - but a bunch of ideas that just won’t leave your head. So I used to hear myself inside my head, I used to hear all these affirmations - negative affirmations - telling me that I’m going to go to hell, I’m gonna die, I’m a horrible person. Then 15, 16 years ago, there was this teacher that I met and he said, “Hey, read a little on this subject.” And I read it. It was the first time ever I’ve heard about self-talk.

How did the affirmations change you?

Back then, I used to have this red mentality, where everything I saw was red. And inside me, there was this burning, destructive fire. So everything around me just started to burn, too. Like a burning force. But then, I decided to change everything to yellow. Now, everything is full of life and sunshine. And everything’s vivid now. So good things just keep on coming to me. It’s not only important, it’s crucial. Without this, I know that I’m going to sink again.

The magnitude of the problem is defined by how much value you give to it. So there’s this problem. Some people say this is a 100-kilogram problem. If you decide it’s only 5 grams, then it’s 5 grams.

Have you seen the Korean hip-hop scene change?

Of course. I made that change. I am a culture shifter, not a culture vulture. I am a trendsetter, and I’m proud of that. I am one of those people that helped that metamorphosis happen. It changed a lot. When I first came onto the scene, there were only a handful of so-called hip-hop artists that stayed close to the genre. Most of time, Korean artists would fuse hip-hop with Korean-style popular music. That happened for more than a decade, at least from 1997 when I started listening to Korean music.

Now that hip-hop has become much more popular and audience-friendly, how can it evolve?

It’s a new era, with social media and YouTube and whatever. So many different channels to check and see what’s going on. So it’s hard to get people to focus on just one album or song. But it’s changing. Nobody used to listen to what everybody’s listening to now. Everybody’s making something interesting. Nobody’s really that popular anymore, the way I see it. Nobody’s really that hot.