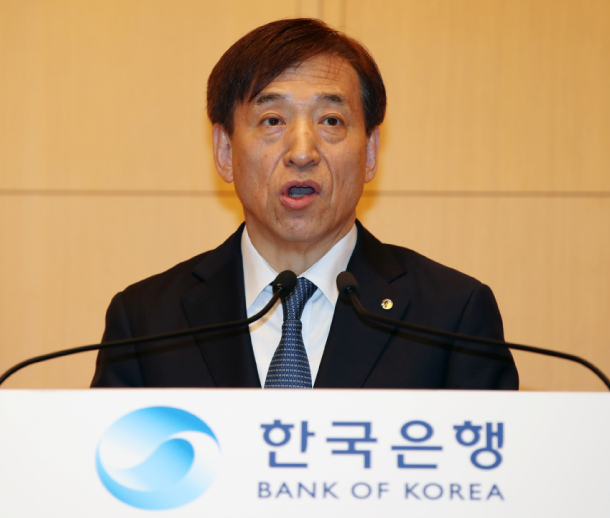 The central bank chief indicated an inclination to monetary loosening Thursday after the U.S. Federal Reserve hinted at a rate cut in a meeting the same day.

Bank of Korea (BOK) Gov. Lee Ju-yeol said the central bank will respond in an appropriate manner to all factors, including actions of the Fed.

“[The BOK] will act appropriately depending on economic conditions including the development of the tariff war between the United States and China and the state of the semiconductor industry,” Lee told reporters on the way to his office Thursday morning.

The U.S. Fed decided to hold its key interest rate in a range between 2.25 percent and 2.5 percent overnight, but hinted at monetary easing by underscoring economic uncertainties.

The change in view and more Fed policymakers expressing the need for an interest rate cut, analysts said, will lead the U.S. central bank to lower the benchmark rate in July.

Lee said Thursday that Bullard’s dissenting view in favor of a rate cut surprised him.

“The dot result [a rate projection of Fed officials] and the call for a 50 basis points cut were unexpected,” he said,

Governor Lee first hinted at a potential interest rate cut last week. Up until a rate-setting meeting on May 31, he had maintained that the time was not ripe for a rate cut.

The markets welcomed the Fed’s readiness to cut interest rates with the main Kospi bourse jumping more than 1 percent in intra-day trading.

The won appreciated against the U.S. greenback. The local currency closed at 1,162.10 won against the dollar, which was 14 won less than Wednesday as investors have been offloading dollar holdings.

It was the first time the won has seen its value go up since June 8.

“It is true that economic conditions unfold in an unexpected way,” he said, “The chances are slim that [a China-U.S. trade] - deal will be made in June, and the semiconductor industry shows no sign of improvement.”

Most recently, global credit rating agency Fitch Ratings slashed its growth outlook for this year from 2.5 percent to 2 percent.

The Korea Economic Research Institute (KERI), a think tank run by the Federation of Korean Industries lobbying group, lowered its projection from 2.4 percent to 2.2 percent.

While Bank of America Merrill Lynch pushed down its outlook for growth this year from 2.4 percent to 2.2 percent, the Korea Development Institute slashed its growth forecast to 2.4 percent from 2.6 percent, matching the OECD’s forecast.

The central bank trimmed its outlook from 2.6 percent to 2.5 percent in April.