McLaren 720S rolled out in Korea

McLaren 720S rolled out in Korea

On Thursday, McLaren Automotive introduced to Korea the 720S Spider, the latest addition to its flagship “Super Series.”

The new convertible from the British luxury sports automaker is equipped with a four-liter, V8 twin turbo engine, rated at 720 horsepower. It can hit 100 kilometers (62 miles) an hour in 2.9 seconds and 200 kilometers an hour in 7.9 seconds. 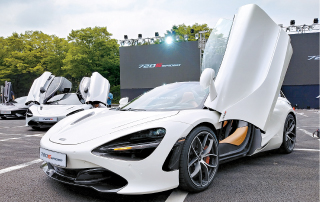 The sun roof can be opened when driving under 50 kilometers an hour, which is higher than the 30 kilometer- an-hour limit of its predecessors.

“Our 720S Spider is full of innovative and smart design features,” said Rob Prichard, head of Asia Pacific at McLaren, during a launch event for the 720S Spider held at Seoul Land theme park in Gwacheon, Gyeonggi.

“This car is the best class-leading sports car of all convertibles of the same level.”

The second Spider model of the Super series has a unique aerodynamic design and utilizes carbon fiber components to reduce weight, the automaker said.

The vehicle is 6.8 kilograms (15 pounds) lighter than its predecessor, the 650S Spider released in 2017, which used steel for exteriors.

The 720S Spider weighs 1,332 kilograms, which is around 88 kilograms less than competing cars.