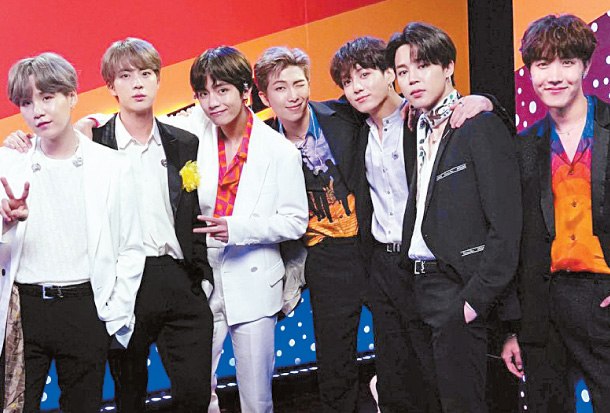 Major landmarks in Seoul will be lit up in violet, the signature color of the sensational K-pop band BTS, over the weekend to celebrate the band’s concerts in the city.

The city will light up two major bridges — Hannam Bridge and Dongho Bridge — that link southern Seoul to central Seoul over the Han River in purple from Friday evening to Sunday night, as well as two of the city’s tallest edifices — N Seoul Tower in central Seoul and the Lotte World Tower in southern Seoul.

Seoullo 7017, the highway garden near Seoul Station in the heart of the city, will also be illuminated in violet as part of Seoul’s gestures to welcome BTS fans, known as ARMY, to the city, according to the city government.

The septet is scheduled to hold the Seoul leg of its “5th Muster [Magic Shop]” fan meeting and concert tour on Saturday and Sunday at the Olympic Gymnastics Arena in southern Seoul.

Last weekend, the band dazzled a total of 45,000 fans on the Busan leg of “Magic Shop.”

Busan celebrated the group’s first solo performance in the city by adorning the Gwangan Bridge in the heart of Busan and other landmarks with purple light. In May, New York City’s Empire State Building was lit up in purple when BTS was in town for their tour.

During the weekend, Seoul will also air welcome messages to ARMY on big TV screens atop buildings across the capital and put up banners to celebrate the concerts by BTS, who are currently the city’s honorary ambassadors.

The city will expand the operating hours of Seoul Metropolitan Subway Line No. 9 and buses passing through the concert venue by one hour to help the fans travel back home after the performances on Saturday and Sunday.

BTS returned to Korea to a hero’s welcome earlier in the month following their sold-out concerts at London’s Wembley Stadium and the Stade de France in Paris.

The upcoming Seoul fan meeting and concert events will be attended by 50,000 fans, and the second day will be broadcast live on internet portal Naver’s V Live service.

On top of the live performances, the event will also include a variety of outdoor activities on the grass in front of the arena at Olympic Park.

BTS is also in the spotlight after Australian network Channel Nine’s pop culture show “20 to One” named the group one of the world’s top 20 global sensations on Wednesday night. The channel posted a one-line apology on Twitter Thursday for creating a controversy after mentioning BTS as one of the top 20 global crazes on the show.

The two talk show hosts introduced the group as “the biggest band you’ve never heard of” and the show pointed out that the group’s Billboard Music Award win was a surprise considering that “only one member actually speaks English.” The commentators also mocked ARMY, which is mostly made up of young women.

The hashtag #channel9apologize spread on social media following the episode, with both local and international ARMY members demanding an apology from the network.

In response to the criticisms, the channel posted a brief apology on its Twitter account on Thursday evening, saying “We apologize for any disrespect and offense taken” in both English and Korean.

A channel spokesperson offered further explanation, saying the remarks were “intended to humorously highlight the popularity of the group.”