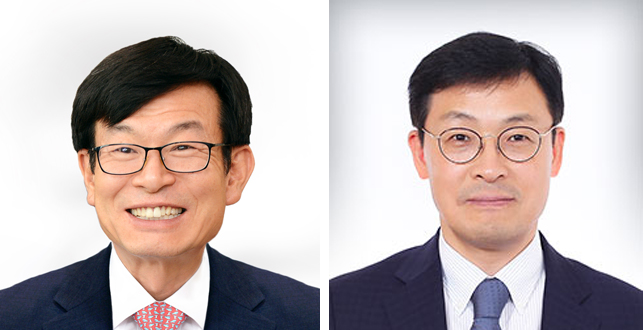 The reshuffle of key members of Moon’s economic team at the Blue House took place as the administration faced intensifying public criticism for its poor performance guiding the economy.

The reshuffle was a surprise, as Moon formed his current economic team less than a year ago. Kim Soo-hyun was named policy chief last November after serving as senior secretary for social affairs and leading Moon’s nuclear phase-out policy and real estate market regulations. Yoon was named to his post last June.

“Kim Sang-jo contributed to realize the vision of a fair economy with his expertise and a balanced political sense when he was serving as the head of the Fair Trade Commission,” Ko Min-jung, presidential spokeswoman, said Friday.

“Lee is a veteran public servant who served in key economic posts,” Ko said. “We have high expectations for him to play an important role.”

Kim, 56, a longtime critic of Korea’s family-run conglomerates, was named chairman of the Fair Trade Commission in May 2017. Kim was an economic professor at Hansung University and a key member of the People's Solidarity for Participatory Democracy before joining the Moon administration.

Lee, 53, passed the civil servants’ exam in 1988 and spent his career at the finance ministry. Moon named him to work as presidential secretary for job creation in 2017. In December 2018, Lee was appointed first vice minister of finance. With the latest appointment, Lee returned to the Blue House secretariat.

Moon’s decision to hire the conglomerate critic as his new policy czar shows that the government will maintain its controversial income-led growth policies despite worsened economic indicators. Kim has been a strong backer of the fundamental direction of Moon’s economic policy.

The Blue House dismissed speculation that more anti-corporate policies would be introduced under Kim’s leadership. “Kim was simply correcting wrong business practices,” Ko said. “It is not true to say that Kim represents anti-corporate positions.”

The abrupt replacement of economic aides was seen as an expression of the president’s frustration at bad economic indicators as his presidency enters its third year.

“The president was attending events to promote his policies every day, but the economic and public affairs aides failed to support him,” a senior presidential aide said. “We’ve heard many complaints that the government was stuck with the minimum-wage hikes and income-led growth controversies.”

The source said Moon had repeatedly expressed his frustration during meetings with aides. “Although uncertainties are high, the economic team must show a larger vision to the public, but it was just too busy countering everyday, pending issues,” Moon was quoted as saying.

When Moon gave a special interview last month to KBS, he expressed concerns. “The wealth gap still remains serious, and job creation is slow,” Moon said at the time. “The government feels painful about these.”

A key Blue House official said Moon wants the new policy chief to design policies that will win over the public. “The president will not change the fundamentals of his economic policies, but he wants to seek the people’s consensus on the specifics,” the official said.

While many assumed the current economic team was replaced in less than a year because of their poor performance, another Blue House official said the reshuffle was to accommodate a political timetable.

Speculation grew that they will be named to cabinet posts when Deputy Economic Prime Minister Hong Nam-ki, Land and Transportation Minister Kim Hyun-mee and Financial Services Commission Chairman Choi Jong-ku leave the government to run in the next year’s general elections.