The number of single-person households in Korea is forecast to grow in coming years, even as the population will start to decrease in a decade.

According to a report from KB Financial Group’s business research institute on Sunday, the number of single-person households in Korea as of 2017 is 5.62 million, accounting for 10.9 percent of the population. The figure is forecast to grow to account for 16.3 percent of the total in 2045. 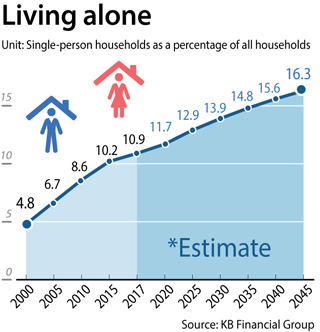 With the aging of the single-person households, 70 percent of those living alone are forecast to be people aged 50 or above by 2045. The report was based on a survey conducted in April on 2,000 KB Financial Group clients aged between 25 and 59 living in capital and metropolitan cities.

Environmental factors - such as the growing preference to stay unmarried and the rising divorce rate - are likely to drive the growth of single-person households, which will expand the economic and social effects related to the change in the household structure, according to the report.

Although the number of single-person households with plans to marry or remarry increased compared to last year, a majority of them continued to show passive attitudes about marriage. Of single-person households, 42.5 percent of those surveyed this year said they intend to get married or remarried someday, an increase from 35.5 percent last year. Those who said they will not get married slightly decreased on year to 17.7 percent from 19 percent.

Housing costs took up an average of 18 percent of the spending, which was followed by food and accommodation, groceries and beverages, and education. The spending tendency diverges from four-people households, which is largely taken up by education, groceries and beverages, and food and accommodation categories, in that order. The average retirement age for single-person households is expected to be 61.3, which is 3.6 years earlier than the average retirement age calculated from last year’s survey conducted on various types of households.

Women generally expected they would retire at an average age of 58, while men believed they would retire at 61 or later. Single-person households believe 1.23 million won is the amount appropriate for monthly savings and investments to prepare for their retirement. But their actual monthly savings and investments stood at an average of 700,000 won, just 57 percent of what they said they needed.

Savings deposits and installment deposits were the most common savings method among the single-person households. Public pension came in at a distant second, which was closely followed by private pensions.