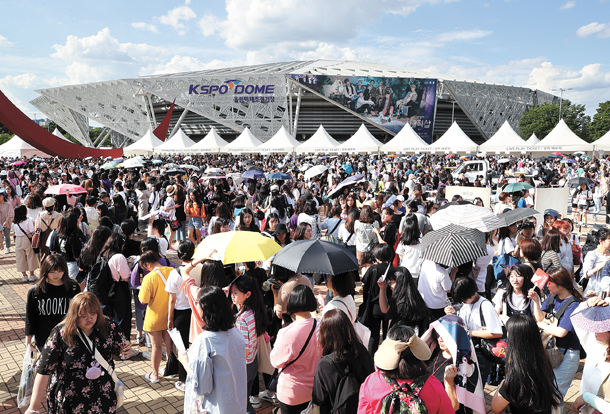 Major landmarks in Seoul were illuminated in violet, the signature color of K-pop sensation BTS, on Saturday as the boy band held concerts in the capital.

The septet held the Seoul leg of its “5th Muster [Magic Shop]” fan meeting and concert tour in the Olympic Gymnastics Arena of Olympic Park in southern Seoul. The celebrations continued on Sunday.

The concert was scheduled for 7 p.m., but BTS fans - known as ARMY - began to arrive at the park starting early in the morning, with some wearing purple shirts.

In front of the entrance of a nearby subway station, a marketplace was set up to trade goods made by BTS fans, including badges and handheld fans.

“It is hard to buy BTS official goods as they sell like hotcakes. So that’s why I am buying goods that BTS fans have made,” an 18-year-old fan said.

At sunset, landmarks in Seoul, including the city’s most prominent edifices - including Seoul Tower in central Seoul and Lotte World Tower in southern Seoul - were lit up in purple.

Last weekend, the band dazzled a total of 45,000 fans on the Busan leg of its tour.

As in Busan, officials from Big Hit Entertainment, the management agency of BTS, held tight identification checks for the Seoul concert.

The agency required that buyer information on tickets match ticket holders’ identity documents as part an effort to curb scalping.