[TOONING IN] Webtoons about the undead have a lot to say: Zombies are a hot subject, and big ideas often outweigh the gory action

[TOONING IN] Webtoons about the undead have a lot to say: Zombies are a hot subject, and big ideas often outweigh the gory action

Web comics are referred to as webtoons in Korea, a portmanteau of web and cartoons. Major portal sites such as Naver, Daum Kakao and Nate have their own webtoon sections, while comic-only services such as Lezhin and Mr. Blue provide hundreds of varieties suited to different tastes. In recent years, webtoons have become so popular that some have inspired TV dramas and movies, and cartoonists themselves have become big-name celebrities.

Zombies are an evergreen object of fascination for audiences. There are so many books, movies and cartoons based on the undead that it would be pointless to list them all. But only recently have they begun to frequently appear in Korea, such as the film “Train to Busan” (2016) and the Netflix series “Kingdom” (2018).

The situation is somewhat similar in the webtoon world; there had previously been a few zombie-themed webtoons, yet their popularity has heated up this year. There are currently so many zombie webtoons that a different zombie-toon is posted on Naver Webtoon every day of the week - a webtoon usually has a new episode once every week. On Monday there is “Dead Life,” Wednesday “Misi Hill,” Thursday “Zombie Daughter,” Friday “Sweet Home,” Saturday “Sum: Kill The Body” and Sunday “Dark Night.” The situation is quite similar on Daum Webtoon, which has four ongoing zombie webtoons.
Most of these works abide by the well-known rules: Zombies are undead, loathe sunlight, bite people or animals to spread their contagion and the main characters must do whatever they can to survive until the monsters are eradicated. Much of the new crop of Korean zombie webtoons stands out by exploring how people behave in post-apocalyptic worlds rather than simply focusing on gory, zombie-hunting action.

Daum Webtoon’s “Subway Line No. 1,” first published in 2013, is being reposted from the first episode. It’s a deep story that goes beyond simple, time-killing cartoons. It follows the journey of Seo Ji-won, who travels from Doksan Station in southern Seoul to Mangwolsa Station in northern Seoul along subway line No. 1 to find his girlfriend, Hye-jeong, in a city that has been taken over by zombies. Some people have compared it to the Russian sci-fi novel “Metro 2033,” as the protagonist encounters different episodes at each station.

While Ji-won runs into different people in different situations, there is one underlying question: How will humans behave when there is no law, when the world as we know it has fallen to pieces and when the old rules no longer apply? In episode 25, near City Hall Station in central Seoul, Ji-won runs into people who call themselves the “future people.” They go around executing “past people” - people who are bound by the rules of the conventional world, such as laws or morals. The future people kill those who still believe there is justice in the world and save those who worship their cult leader. Together, they pray until the arrival of their day of salvation. 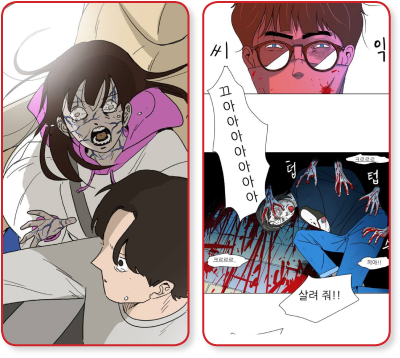 “Zombie Daughter,” above, on Naver Webtoon is the story of a father trying to raise his zombie daughter. Right, Daum Webtoon’s “Subway Line No. 1” imagines what society will be like without law and order. [SCREEN CAPTURE]

“They don’t want the truth,” their leader secretly whispers to a victim pleading with the mob. “All they need is someone to sacrifice, to erase the terror from their minds.”

Ji-won is able to break free from them thanks to one of their members who lets him go at night, then continues his journey northward. Following episodes touch on what would happen to humanity in the absence of law and order rather than focusing on the action between the living and the undead.

According to Yoon Min-woo, a professor of English language and literature at Yonsei University, the fact that zombie webtoons and other literary works show a never-before-seen quality of society could be one of the reasons why they are becoming so popular.

“There is a side of the society, the politics or culture, that these kinds of works show to the extreme,” said Yoon. “For instance, back a few decades ago, people didn’t really take science fiction that seriously. But now that artificial intelligence is actually here and we witness new technology every day, it’s become as important as ever. The subject of zombies doesn’t exactly fall into the sci-fi genre, but there is a resemblance in that it shows something we haven’t experienced yet.”

For readers who would like to try something a little lighter, Naver’s “Zombie Daughter” gives people both a good laugh and cry over how father Jeong-hwan looks after his zombie daughter, Su-a. Apparently, Su-a has about the same level of intelligence as a dog, and can be tamed if she is fed with pig’s intestines or any other uncooked meats. The webtoon’s comic descriptions and cute illustrations have won it much popularity, and the author even recently released KakaoTalk emojis based on Ae-yong, the cat in the book. Su-a could be thought of as a handicapped child, in which case the story translates into a story of a family who must raise their child so that she might be able to cope in a world without her guardians.

For those looking for tense action - and perhaps less to think about - Naver’s “Sweet Home” and Daum’s “Agwi” are recommended.

Hopefully, society never experiences a zombie apocalypse. Yet just in case something goes awry, it might not be such a bad idea to take a look at one or two webtoons as a precaution.