The first thing that diners reach for when food is served these days is not a fork or chopsticks. It’s usually their phones, so that they can snap photos of their freshly served dishes to share with their friends and family on social media.

While more and more people are looking for instant gratification in their dining experiences, producer Lee Wook-jung, known for his series of food documentaries that delve into the connection between food and the history of mankind, encourages people to take it slow and try to see beyond the food on their plates.

Lee believes that food culture changes because of people’s desire to share with others. While many do so with photos and videos on social media, he has been trying to show people that there are other ways to connect, such as reading books or using restaurants and libraries located in new buildings in older neighborhoods that the Seoul city government is trying to update.

“Just like how YouTube and other social media are used as platforms, paper books are a kind of platform that connects people offline,” Lee said in an interview with the Korea JoongAng Daily. 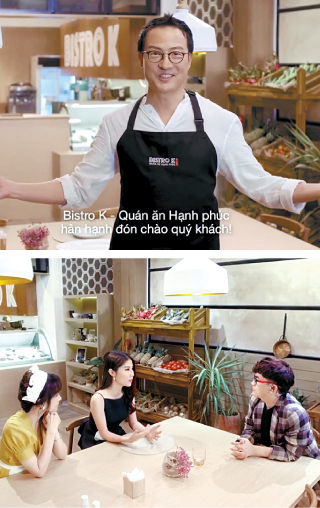 Scenes from the promotional video of Bistro K, an entertainment show that has producer Lee Wook-jung, top, as a chef in the kitchen to cook according to the needs of the guests. [SCREEN CAPTURE]

At the Seoul International Book Fair, which runs until Sunday, Lee has set up something that looks similar to a boxing ring, where salt and sugar are ready to battle. Sweet and salty flavors have led to the development of civilizations and cities, so he piled up books on sugar on one side and salt on the other. The rivalry of the two ingredients might catch the attention of people passing by, Lee thought.

“I wanted to stir up memories people have about certain tastes,” he said.

Reminding people of certain tastes is also the goal of “Bistro K,” a show that is currently airing in Vietnam. Lee pitched the idea for the show to a Vietnamese cable TV channel. He talks to Vietnamese celebrities and listens to their worries and needs in life, and then cooks food that may help them forget their troubles and find new ways to move forward. The food he cooks for them isn’t necessarily only Vietnamese, but a mix of cuisines he has tried before.

“This is not something I have done before,” said Lee, adding that he is driven by his curiosity. He found the culinary culture in Vietnam fascinating, which led him to want to learn more about the life stories of locals.

Lee is now using his local and global experiences to improve the lives of others. Together with the Seoul Metropolitan Government, he is leading a project to create food-related cultural hubs inside of buildings located in neighborhoods that aren’t often visited by locals. The first spot to open is close to Seoul Station, a neighborhood that isn’t as hot as gathering places like Garosu-gil in southern Seoul or Seongsu-dong in northern Seoul, in an attempt to make humdrum neighborhoods livelier.

The new space, where people will be able to eat, read and learn in group classes, will be open as early as next month. “Fascinating food and beverage options are the first things that could bring people into areas that have not gotten spotlights yet and we will use those to make some parts of the city renewed.”

Lee recently met with the Korea JoongAng Daily to talk about how food tells stories and his upcoming projects. The following are edited excerpts from the interview. 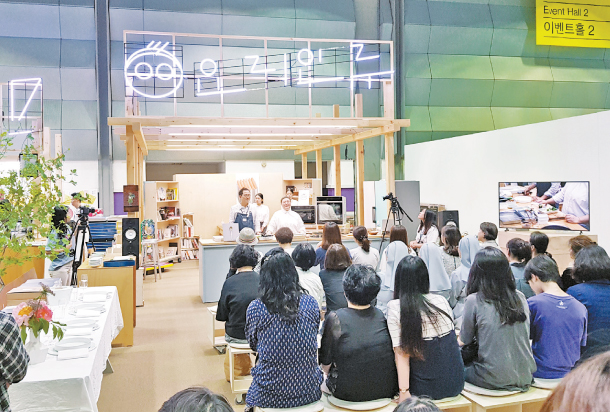 Producer Lee Wook-jung talks to guests at Seoul International Book Fair on Friday to share his experience with culinary books and how books help one understand food served to them on the table better with rich information. [MOON SO-YOUNG]

Q. What are you trying to show at the book fair?

A. I wanted people to know that there are some good culinary books in Korea. I wanted people to know there are books that have something more than just recipes. Chefs, including Kim Ho-yoon [of restaurant Ripe and Osteria Orzo], have come to talk about the history of a particular dish that people want to make, and how each chef takes different approaches to making that dish. Reading culinary books should not only be for gaining knowledge. Books are like frozen insights. We use something frozen from decades and centuries ago to make the present better and more fruitful.

If people are recording their daily food intake online, why is it still necessary to read books or watch food documentaries?

Books are like slow food. What’s posted online is more like instant food. Browsing different food content may make you feel temporarily full and will make you crave more even after you feel full, but those things do not really have much information. You can call it junk food. Books are more like a platform where you can be connected to people who think about the long-term future.

Is the book fair a place where you can encourage people to read more books?

Books and cooking have evolved over time separately and together. I think just like how many mediums that deliver knowledge have come about, the marriage between the two will evolve in a way that no one can think of at the moment.

Book reading can lead you to see your favorite chef talk about the culinary world and even try a food they cook on the spot.

Why is eating important for you?

I don’t think that I have ever skipped a meal. Skipping a meal is really difficult for me to do because I take each meal very seriously. And if I crave something, I have to eat it.

Is what you eat for each meal important as well?

It’s more about time. For me, the time is important, more so than what I eat. The time I spent with people, talking about things they care about and sharing how they feel these days, is important. The reason people get together to eat and drink isn’t just because people have huge appetites. Food connects the dots and it is a way for people to meet each other. I don’t really care much about going online to look for hot and trendy restaurants to try. I eat alone time to time of course, but going alone just to try food that’s supposed to be good isn’t something I would actively do. That is not why I pursue food. There is something that eating alone can never fulfill. For me, being with interesting people and having a good talk over a meal is important.

How do you choose a theme for your documentaries?

There are many different storytellers out there. I don’t think I’m one of those who can easily get the public’s attention. My work always starts with my curiosity. When I learn about a particular food, I want to see how people from other cultural backgrounds use it and understand it. I wanted to see how it has changed lives and the culture. It may be simple but it has to be able to [tell a story]. Plus, the food needs to be visually beautiful.

What are you going to delve into for your future documentaries?

Drinks. The first thing infants get to have after they are born is liquid, and probably the last thing many people have before death is a liquid, or something easy to digest. Drinks other than water are something people may not necessary need to survive but something people can’t live without. Coffee does that for many. It gives some excitement. It is not easy to get enough funds to make big documentaries like “Noodle Road” or “Food Odyssey,” but that’s something I’m working to make soon.

Have you thought about using the content you have made to connect with more people?

All the videos I have produced and all the writing I have done are informative. I want them to be used for educational purposes. I want to distribute them online. My target audience is anyone around the world. People who watch them become more involved in the future of food.

What makes you want to record stories about the food we eat now?

People throughout history have been relatively lukewarm about recording what they ate everyday. What people ate and how they felt about the food they ate was not written down. Much of what we know about the history of food is based on presumed ideas. Many experts had to read documents that don’t really have much to do with food and then read between the lines, so I wanted to record as much as I could when it comes to food. And the trend has changed so much these days as people generally record what they eat. Avid social media users take pictures of the food they eat everyday. That’s an enormous amount of data.

Why is reviving neighborhoods important to you?

The effort to bring back people into buildings neglected by the public is something that is common in other countries, such as Japan or the United States. Sharing food that’s appealing is important to making people gather. Art galleries and other things may also be able to bring people together, but not every day. Places where food and drinks are served can attract the same people every day. I have seen an appealing food scene combined with the other cultural options really revive neighborhoods. So we want to renovate old buildings to make cooking studios, cafes and restaurants so that locals would want to come experience that and sign up for other cultural opportunities that are available.

Do you have any other plans to open multipurpose cultural spots?

Another plan I have is to open a restaurant that sells take-out food boxes in Hoehyeon-dong, central Seoul. There are many old buildings, and we will renovate one as a multipurpose spot that works as a restaurant, cafe and library. The food boxes will be made with dishes whose recipes come from the neighbors.