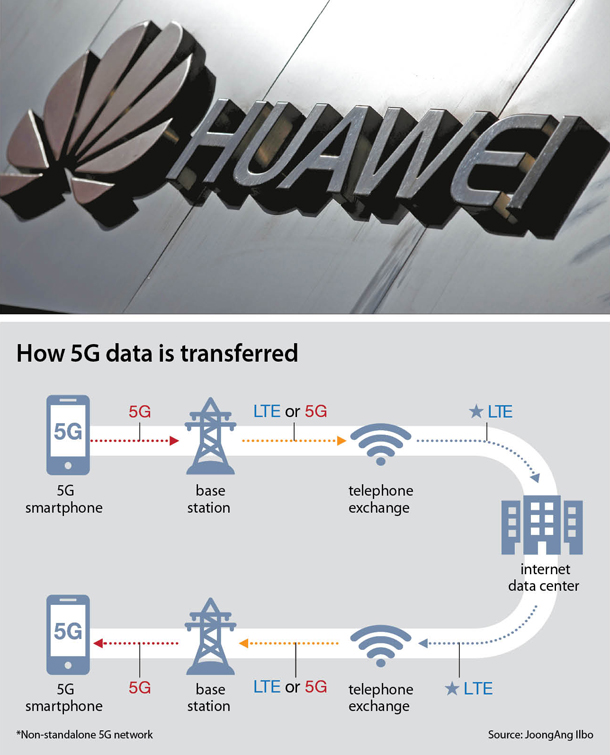 LG U+ finds itself in an awkward position as the United States cranks up the pressure on its allies to stop using Huawei equipment.

LG U+, the smallest carrier in Korea, is currently the only Korean mobile carrier that has openly announced it is using Huawei equipment for its 5G network.

“It is impossible to use non-Huawei equipment because we used Huawei’s network equipment when establishing the infrastructure for our 4G long term evolution [LTE] network,” LG U+ argues.

But is that really the case?

According to experts, kind of.

“The 5G network commercialized in Korea is currently a non-standalone network,” said Lee Sung-yeop, a professor at the Graduate School of Management of Technology at Korea University. “If LTE and 5G equipment are made from different manufacturers there could be a problem in interoperability.”

Non-standalone literally means the network cannot stand alone and has to depend on something else to work. Currently, 5G in Korea depends on the existing LTE network which, in LG U+’s case, runs on Huawei equipment.

Think of the telecommunications process as a relay race.

Right now, mobile carriers are using 5G network infrastructure for only part of this process and still depending on LTE for the rest. It’s like changing the first and last runners in the relay to faster competitors - 5G runners, to be precise - and still having the slower LTE-level racers in the middle. For this reason, experts say it can be difficult to offer a seamless network connection if the LTE and 5G equipment are made by different manufacturers.

“Even if equipment manufacturers make their product following international standards, the management and operation of the equipment is done through independent solutions developed by each manufacturer,” said a high-ranking official from a state-run research center who asked for anonymity. “It’s like it is hard to use Apple phones if you have used Android phones for a long time, even if you are used to using a smartphone.”

Then does it mean it is technologically impossible to remove the Huawei equipment from LG U+’s network infrastructure?

According to experts, not entirely.

There are three possible ways for LG U+ to get rid of Huawei. The first option is to remove Huawei-made equipment from the LTE network, establish a whole new infrastructure using equipment from other manufacturers and then use non-Huawei equipment for the 5G network as well. This option would be hugely expensive.

The second option is to develop a solution that offers interoperability between Huawei’s LTE equipment and 5G equipment from non-Huawei manufacturers.

So none of those options are particularly attractive to LG U+.

“The first option is asking the company to pour in trillions of won and the rest of the other options mean the company has to do nothing and wait while competitors go ahead attracting 5G subscribers,” said Kim Hong-sik, a research fellow at Hana Financial Investment. “All three options are practically hard to choose for [LG U+.]”

“Is it possible to make LG U+ spend so much when the reason it chose Huawei was for its value for money,” an electric and electrical engineering professor told the JoongAng Ilbo under the condition of anonymity.

How are other countries dealing with the Huawei issue?

According to multiple reports including Bloomberg, Japan’s SoftBank recently decided to rule out Huawei products in building its 5G infrastructure, even though it used Huawei equipment for LTE.

This means SoftBank will either remove Huawei-made LTE equipment or develop software to increase interoperability between Huawei and non-Huawei equipment. Bloomberg reported last month that SoftBank Group’s CEO Masayoshi Son said it would cost about 5 billion yen ($46 million) to replace existing Huawei gear in its network at an earnings briefing in February.

“In the case of SoftBank, it was a strategic decision because it needs the U.S. government’s approval for the merger between its U.S. subsidiary Sprint and T-Mobile,” a high-ranking official from LG U+ said.

“As Japan is planning on commercializing 5G in 2020 when the Tokyo Summer Olympic Games begins, their case is different from Korea, which has already commercialized its 5G network,” said Choi Seung-won, a professor teaching at the department of electronic engineering at Hanyang University. “SoftBank has some time to prepare for alternatives like developing a solution to connect [Huawei’s] 5G equipment with equipment from different manufacturers.”