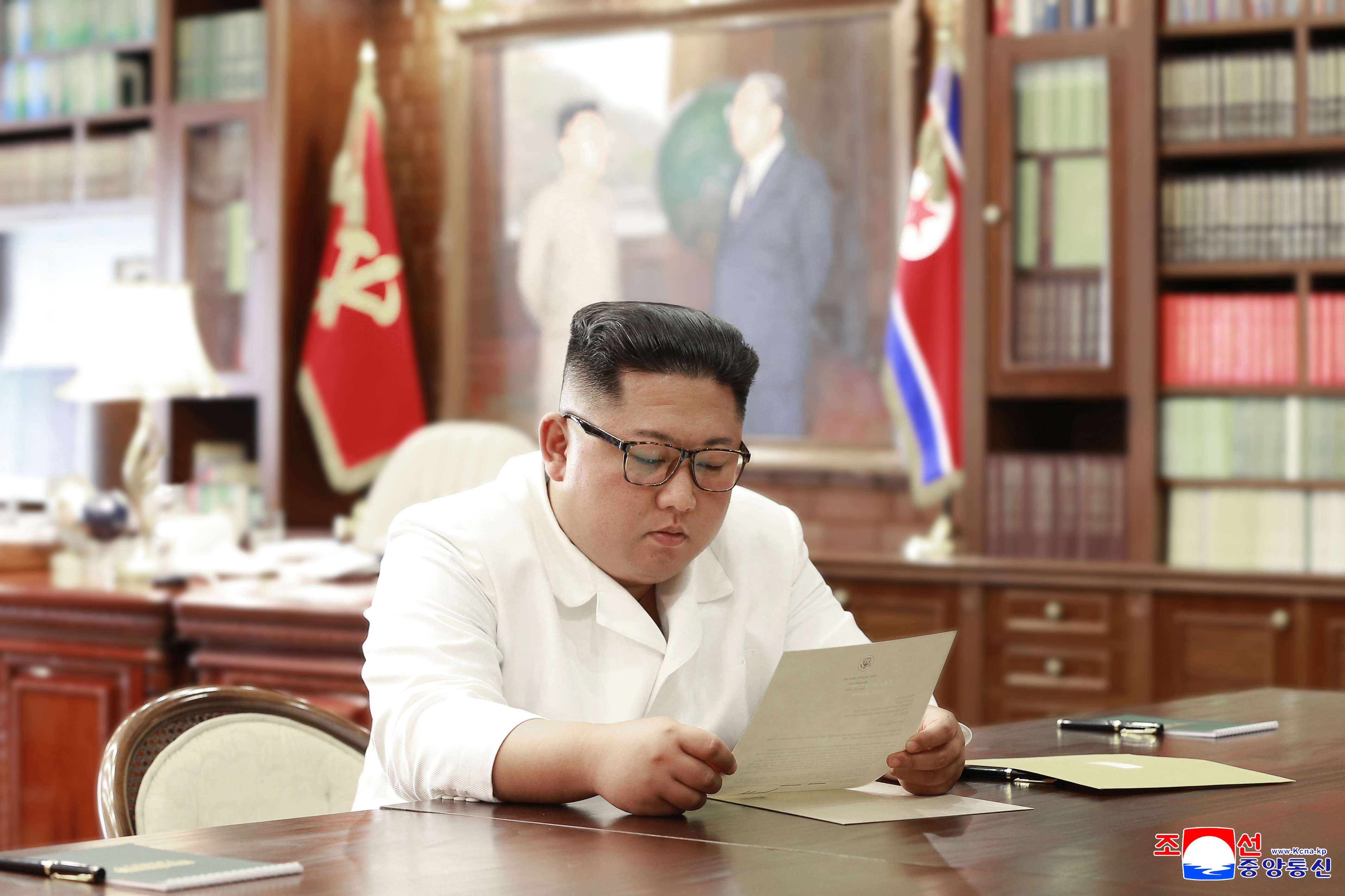 North Korean leader Kim Jong-un said he would “seriously contemplate” a letter he received from U.S. President Donald Trump, according to Pyongyang's state media on Sunday.

The Korean Central News Agency (KCNA) released a brief report Sunday on Kim's reception of a “personal letter” from Trump, weeks after the U.S. president said that he received a “beautiful letter” from Kim on June 11.

“After reading the letter, the Supreme Leader of the Party, the state and the armed forces said with satisfaction that the letter is of excellent content,” the English-language report read. “Appreciating the political judging faculty and extraordinary courage of President Trump, Kim Jong Un said that he would seriously contemplate the interesting content.”

No further elaboration was made on the contents of the letter, but it is believed to be a reply to Kim's earlier missive to Trump, which arrived on the eve of the anniversary of their first summit in Singapore on June 12, 2018.

Despite speculation that it may have contained a proposal to revive the stalled denuclearization talks between the two countries, a White House official later told CNN that Kim's letter was largely a “birthday greeting” wishing Trump good health on his birthday on June 14, which Trump confirmed during an interview with Time Magazine last Monday.

The U.S. president said on June 11 that Kim's letter – which he described as “beautiful” and “very warm” - confirmed that the two continued to share a “very good relationship,” and said “something will happen that's going to be very positive.” 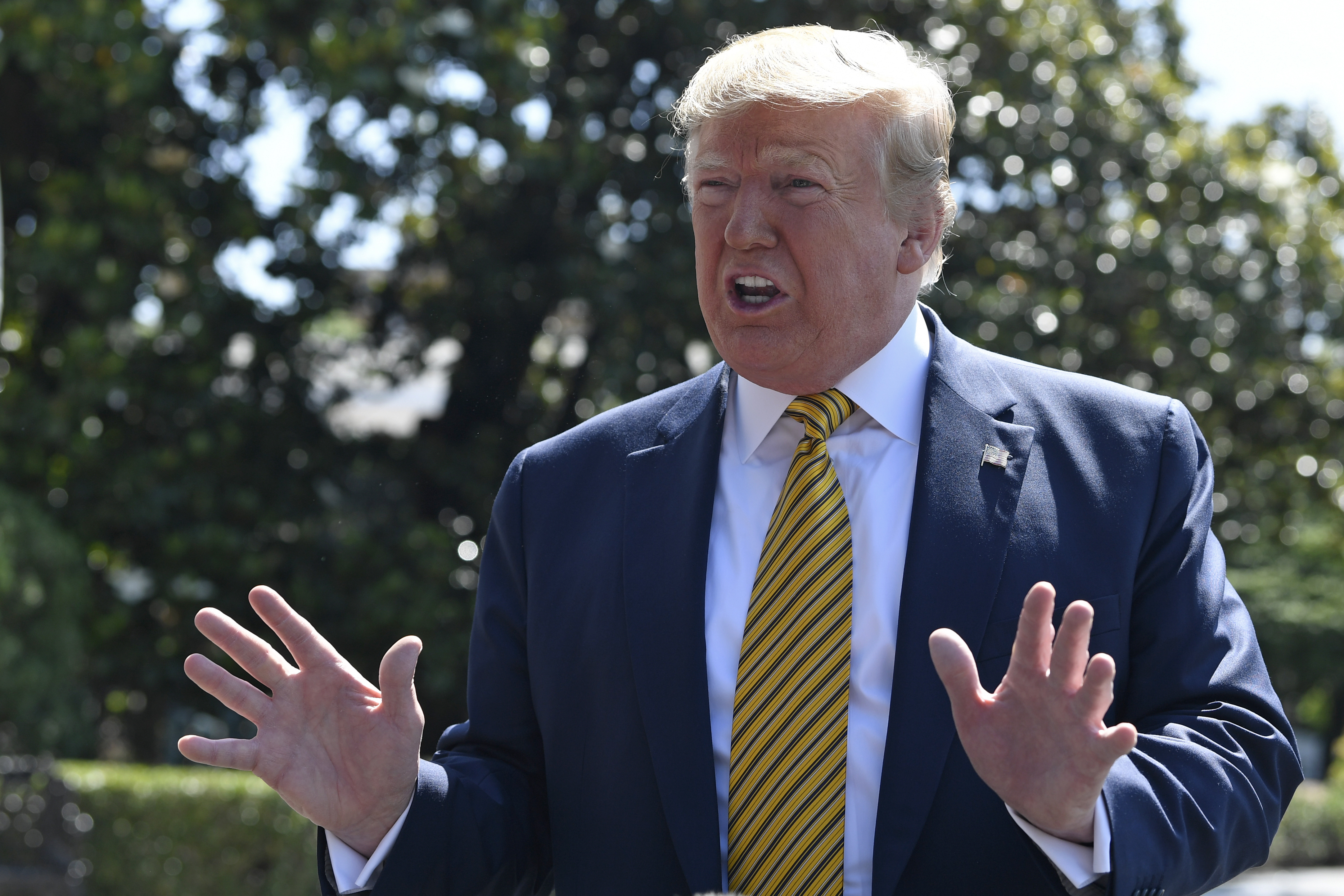 President Donald Trump speaks to reporters at the White House in Washington on Saturday before boarding Marine One for the trip to Camp David in Maryland. [AP/YONHAP]

According to AP, the White House has yet to confirm that it sent a letter to Kim. However the timing of this epistolary exchange – coming immediately following Chinese President Xi Jinping's first official visit to Pyongyang – suggests the letter could contain a new proposal to reopen direct talks between the U.S. and North Korea.

During his visit to Pyongyang, Xi stressed China's role in the negotiation process over the North's nukes, and he is expected to carry some sort of message from Kim to Trump when he meets the U.S. president on the sidelines of the G-20 summit in Osaka, Japan, from Thursday to Saturday. According to China's state-run Xinhua News Agency, Kim told Xi he was “willing to stay patient” in the talks with the U.S., though he blamed Washington for prolonging stagnation in those negotiations.

On Friday, the last day of Xi's two-day summit with Kim, the two leaders reached a consensus on “important issues” discussed during their five meetings over 2018 and 2019 and reaffirmed their countries' “special relations of friendship...whatever the international situation,” according to KCNA on Saturday. Xi also bolstered China's support for the North's “new strategic line” - Kim's focus on promoting economic development -- and a “political solution toward solving the nuclear issue on the peninsula,” reported Xinhua.
The “serious contemplation” that Kim said he would undertake over the “interesting” and “excellent” contents of Trump's letter also suggests it holds a conciliatory message that the North may be willing to consider. Similarly, in regards to Trump's earlier letter to Kim, South Korean President Moon Jae-in said it contained a “very interesting section.”

Washington's chief interlocutor with Pyongyang, U.S. Special Representative Stephen Biegun, alluded to the possibility of a new negotiation strategy when he brought up the “need for a flexible approach” during a diplomatic forum in Washington last Wednesday. South Korea's top inter-Korean official, Unification Minister Kim Yeon-chul, said on Friday that he considered such a remark as a sign that the U.S. may have adopted a new position towards the talks since the collapse of the second U.S.-North Korea summit in Hanoi, Vietnam, in February.

After publicly objecting to the U.S.'s refusal to grant sanctions relief at the summit in return for the dismantlement of its Yongbyon Nuclear Complex, Pyongyang announced it would wait until the end of the year for Washington to present “a new calculus” in their talks. Yet so far, the U.S. has maintained that it would not loosen its chokehold on the North's economy in exchange for an incremental approach to the North's denuclearization.

It is questionable, however, how long the Trump administration will be able to keep up its mixed-messages with Pyongyang given mounting political and diplomatic constraints. The fact that no practical progress has been made towards the North's denuclearization despite two high-profile summits may damage Trump's claim to be a master negotiator, while Washington's increasingly confrontational spats with countries like China and Iran do little to advertise the administration's foreign policy acumen. Some semblance of progress with Pyongyang may be a priority for Trump before he faces the U.S. electorate in next year's presidential elections.