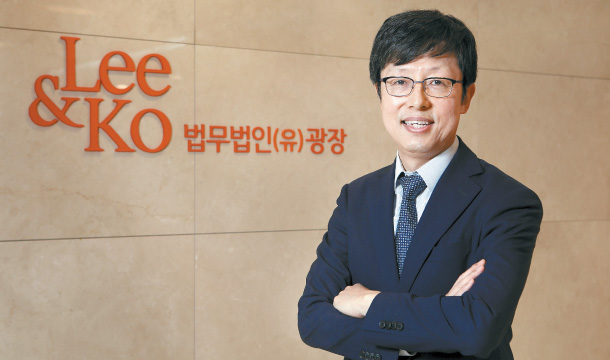 Ahn Yong-seok spent the past 30 years helping Korean companies grow in and outside the country. Now, he wants his juniors at Lee & Ko to take global clients on a challenging new ride. [PARK SANG-MOON]

Ahn Yong-seok had mixed emotions when he first arrived at Lee & Ko’s office in downtown Seoul for a part-time job nearly 30 years ago.

He had passed the bar exam but wasn’t sure law was his calling. One of the first things he realized after entering the legal profession was that, in courtrooms, there always was a winning side and a losing side.

As a young budding lawyer, seeing people suffer after a ruling upset him.

But life at Lee & Ko turned out to be different. As a part-time researcher, his job was to translate business contracts for domestic and foreign companies at a time when the market was starting to open up with Korea’s vertiginous economic development.

Ahn realized that in the world of corporate counseling, there was no losing side.

Since joining Lee & Ko on a full-time basis in 1989, Ahn has mainly provided legal counseling to corporate clients, specializing in general corporate practices, competition law and mergers and acquisitions.

In March 2018, he was elected managing partner of a law firm that has maintained a winning streak for many years. The Legal 500 Asia Pacific 2019 named Lee & Ko Korea’s leading law firm in all 15 practice areas covered in its directory, including antitrust and competition; banking and finance; capital markets; corporate and M&A; and dispute resolution.

Looking back, Ahn said he’s glad he didn’t give up on law.

“There wasn’t a single moment that I regretted becoming a lawyer,” said Ahn. “The industry has been responsive to how much effort I put into my work. I worked hard, so my corporate clients showed appreciation by giving me more work. I taught them law and they taught me business.

In a recent interview with the Korea JoongAng Daily at Lee & Ko’s office in central Seoul, Ahn explained how his law firm reaches out to global clients, the upcoming International Bar Association (IBA) annual conference and the future of Korea’s legal service industry.

The following are excerpts from the interview, which were edited and condensed for clarity.

Q. I expect the IBA annual conference to have a more profound meaning for your law firm than others, given that Choi Chung-hwan, a partner at Lee & Ko, chairs the organizing committee.

A. In terms of preparations, we’ll be holding receptions on the sidelines of the conference this September and participate in the meeting as speakers just like any other law firm.

But apart from preparations, one thing that I truly think sets us apart from other Korean law firms is that we have several attorneys who were or currently are deeply involved in the work that makes the IBA what it is. And that’s by serving as officers on various IBA committees, including those related to international franchising, antitrust and water law. IBA committees are basically a platform on which officers come together to share knowledge, build worldwide connections and organize numerous functions throughout the year. I personally worked six years as an officer on the Antitrust Committee before assuming the role of managing partner at Lee & Ko.

Can you tell us about Lee & Ko's foreign offices?

We routinely provide services to clients who require legal assistance in countries such as China, Japan, Vietnam, India, Russia, North and South America, Europe and the Middle East. We have our own representative offices in Beijing, Hanoi and Ho Chi Minh City in Vietnam.

In Vietnam, we opened our Ho Chi Minh City office in early 2016, and then followed up with another office in Hanoi later that year. The offices cover the entire Southeast Asian region, helping Korean companies trying to enter the rising market as smoothly as possible.

In 2018, we also provided legal counseling to GS Retail for its opening of a GS25 convenience store in Vietnam - which was the first by a Korean company - through a joint venture with a Vietnamese firm.

Our Beijing office was opened in 2005. Over the years, we legally advised Doosan Infracore in its establishment of a joint venture with a Chinese company to enter the Chinese diesel engine market, and also helped Lotte Mart sell its shares to Chinese retail companies.

Our goal in general is to nurture our lawyers into legal professionals who are capable of offering top-tier services that fit the global standard. And to do that, we invest a lot of time and effort to help our lawyers receive top-quality education, in part by sending them to international conferences in their respective legal fields and building an educational environment at the office they’re based in, where they can gain hands-on experience from their superiors and pass on know-how to their juniors. Our decision to establish the Lee & Ko Global Commerce Institute in 2017 was one idea to reach that goal.

Tell us more about the Global Commerce Institute.

The Lee & Ko Global Commerce Institute is a part of Lee & Ko’s three-step “one-stop” service that supports various cross-border work taken on by our practice groups. It’s basically a research institute that monitors new developments and trends in global trade and investment, analyzes major international trade dispute cases and provides in-depth advice and strategic insights to Korean and foreign enterprises in connection with their trade and investment-related planning and concerns.

The institute is led by Bark Tae-ho, an internationally renowned trade expert who formerly served as Korea’s minister for trade, ambassador-at-large for international trade and chairman of the International Trade Commission of Korea.

Members of the Global Commerce Institute include trade researchers, Ph. D candidates from the Seoul National University Graduate School of International Studies as well as our lawyers.

We have what we like to call a one-stop service for all cases of any nature. Case management is really important when taking on work that involves various areas of expertise. So the first of our three-step, one-stop service is the International Board, which monitors all of Lee & Ko’s inbound, outbound and cross-border work.

The International Board is in charge of sending each case to the best-fitting practice group, which would be the second of our three-step, one-stop service. The third step is the aforementioned Global Commerce Institute, which supports those practice groups by providing relevant data and analyses.

You’ve worked nearly three decades at Lee & Ko. When did you feel the proudest?

When I first started advising Korean companies, I never imagined Korea’s economy would grow as big as it is today. Our firm grew as Korean companies grew, and I just feel so grateful about the whole process and how everything turned out.

One of my next goals is to help our junior lawyers broaden their perspectives to the outer world, to eye the foreign market and do global business.

Britain has a relatively small domestic legal service market yet British law firms managed to expand their business worldwide to serve clients all over the world.

I don’t see why Korea can’t do the same. That’s why globalization is so important for Korea’s legal service industry these days.