The NC Dinos’ struggles this month have given the bottom five teams in the KBO a shot at redemption. 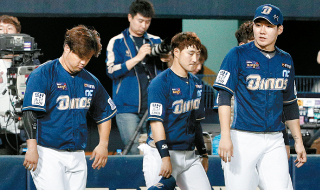 The NC Dinos walk up to the field after losing to the Doosan Bears at Jamsil Baseball Stadium on June 20. [NEWS1]

However, the Dinos’ struggle this month is giving hope to the lower ranked teams. In 20 games the Dinos played in this month, they’ve had six wins and 14 losses. Due to this, they’ve dropped to fifth, only four games ahead of the sixth-ranked Samsung Lions.

Despite the injuries of its starting players in the beginning of the season, they’ve still managed to fulfill their absences. The Dinos had to start the season without Na Sung-bum, as he was injured during a practice game. He quickly rejoined the lineup, and the Dinos benefited from his strength as a batter. It wasn’t long before Na ranked in the league’s top five in batting average, on-base percentage and slugging percentage.

But that didn’t last long. During a game against the Kia Tigers on May 3, Na injured his knee while sliding to third base. Surgery to repair the injury cost him the rest of the season.

Then, things got worse for the Dinos. Their bullpen pitchers started to struggle and Christian Bethancourt, who plays catcher and outfielder, was sent down to the Futures League. The Dinos foreign pitcher Eddie Butler is also expected to miss about three weeks of the season due to a shoulder surgery.

Due to this, since the game against the SK Wyverns on June 14, the Dinos had a seven-game losing streak. They finally ended the losing streak with a win against the KT Wiz on Saturday but were not too successful overall in the series, as they lost on Sunday.

While the Dinos were struggling to make a comeback, the lower-ranked teams started to take their chances.

The Tigers, who had their manager step down from his position earlier in the season, made a comeback in May and have been steadily making improvements since. Their ace pitcher Yang Hyeon-jong made his comeback by picking up four wins in all four games he started in this month and found its closer, Moon Kyeong-chan. In six games Moon played in this month, he picked up three saves and has a 0.00 ERA. The Tigers won their weekend series against the third-ranked LG Twins.

The Samsung Lions, too, are another steadily gaining team. This month, they’ve picked up nine wins and 11 losses to retain their spot at sixth and are the closest team to the last postseason spot. The Wiz, too, have made quite an improvement this season. Although they are ranked eighth, in their 10 most recent games, the Wiz have a 0.500 winning percentage as they’ve picked up five wins and five losses.

The bottom ranked Lotte Giants are also looking to make their way off the bottom of the table with the addition of two new foreign players. Against the fourth-ranked Kiwoom Heroes over the weekend, the Giants took the series with two wins and are now only 2.5 games away from the ninth-ranked Hanwha Eagles.

Interestingly, this month’s results are making the KBO’s regular season look similar to last year’s. In 2018, the Doosan Bears dominated the regular season by finishing 14.5 games ahead of the runner-up, the SK Wyverns.

But this season, the Wyverns are the dominant team. Over the weekend, they swept the Bears and extended their lead by four games.