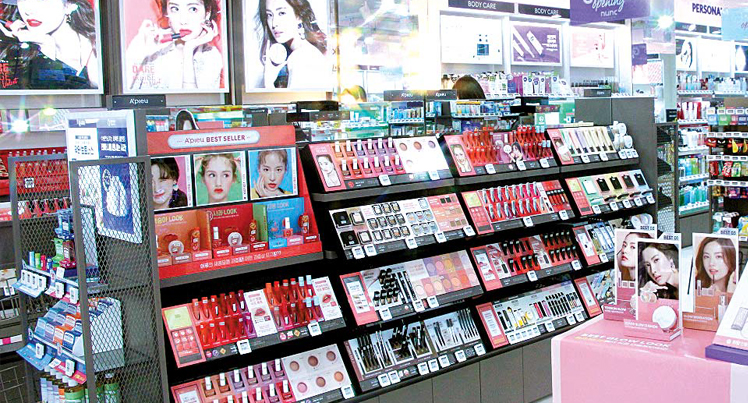 Amid intense competition, struggling cosmetics companies are transforming their shops into multi-brand stores.

Following the growing preference to shop at health and beauty stores, cosmetics firms - like Able C&C and Amorepacific - are rapidly expanding multi-brand shops. With the French cosmetics retailer Sephora scheduled to open its first branch in Korea in Gangnam, southern Seoul, in October, domestic beauty operators are rushing to raise their presence in the multi-brand cosmetics market. 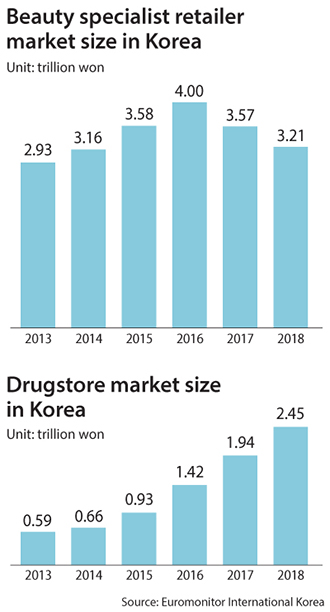 Able C&C, which owns the Missha brand, opened its first Nunc multi-brand store near Ewha Womans University in western Seoul on June 14. There are currently five Nunc branches nationwide. The company plans to expand the number to 20 by next month.

Apart from its own brands, which include A’Pieu, Mefactory and Stila, Nunc sells beauty products from 150 brands not part of Able C&C.

“The domestic cosmetic market continues to dwindle,” said a spokesperson for Able C&C. “We believed opening a multi-brand shop is an important business strategy to keep up with the changed consumption patterns to shop at a location where multiple brands are sold.”

While the market size of beauty specialist retailers, where the products of a single brand are sold, started decreasing in Korea in 2016, that of drugstores, like Olive Young, continued to inch up over the past five years.

Amorepacific, which has the Laneige and Sulwhasoo brands, opened its first multi-brand store, Aritaum Live, in Gangnam in September last year. The company plans to continue turning the existing Aritaum stores into Aritaum Live stores this year.

“Sales at the Aritaum store in Gangnam went up by 20 percent since it started selling products from other companies,” said a spokesperson for Amorepacific. “Of those that are directly managed by us, we plan to actively transform Aritaum stores into Aritaum Live stores. Of those that are operated as franchises, we plan to convince the store’s operators to also change the store into Aritaum Live.”

LG Household & Health Care opened multi-brand Nature Collection in February 2016. The company currently only sells products of its own brands, like The Face Shop, Isa Knox and Beyond. But it hinted at the possibility of following the footsteps of its rivals.

“As of now, we don’t have plans to start selling products from other cosmetics companies at Nature Collection, but we are not entirely closed to the possibility,” said a spokesperson for LG Household & Health Care.

“But the transformation is expected to intensify the already cutthroat competition, especially if Aritaum transforms more than its 1,000 stores into Aritaum Live. Aritaum may be able to compete against rivals like drugstores or Sephora since its name value will enable it to secure deals with popular foreign brands, but the direction the beauty industry is heading could make it tough for smaller operators like Nunc to survive in the long term.”