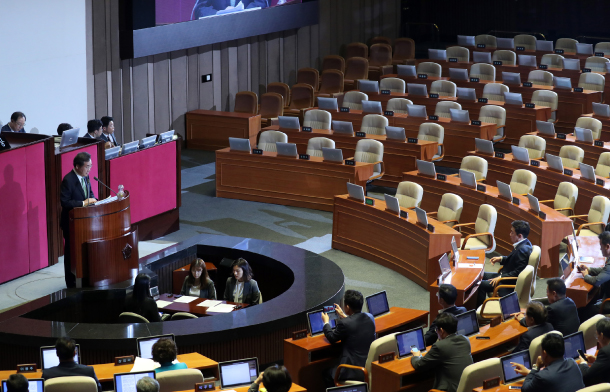 Prime Minister Lee Nak-yon delivers a policy speech on a supplementary budget bill at the National Assembly on Monday while lawmakers of the main opposition Liberty Korea Party boycotted the extraordinary session. [NEWS1]

Leaders of rival parties at the National Assembly struck a deal on Monday to end three months of bitter partisan stalemate that paralyzed the legislature, only to have the main opposition Liberty Korea Party (LKP) reject the compromise hours later.

In a closed-door meeting Monday afternoon, the floor leaders of the ruling Democratic Party (DP), main opposition Liberty Korea Party (LKP) and minor opposition Bareunmirae Party agreed to discuss the government’s request for a supplementary budget of 6.7 trillion won ($5.8 billion) as well as several other key bills until the closing of the special session on July 19.

The special session began last Thursday after the DP and its three allied parties filed an official request calling for its inauguration without the LKP.

But in an internal lawmaker’s meeting two hours later, a majority of LKP lawmakers voted against the deal. LKP floor leader Rep. Na Kyung-won said that her party’s lawmakers wanted a “clearer agreement” and that her party would return to its original stance to boycott all legislative activities until its demands are met.

The LKP began its boycott in April in protest over the DP and its allies’ decision to fast-track controversial bills on electoral and judicial reform.

The conditions the party put forward since then are that the DP consent to holding a parliamentary hearing on the economy, which the LKP hoped to use to grill Moon Jae-in administration officials over the country’s weak economic performance.

They also demanded an apology from the DP and other parties for forcing through the fast-tracked bills and to renegotiate the content of those bills to find a compromise that would be acceptable to all parties.

Otherwise, LKP floor leader Na said LKP lawmakers would only sit in on select parliamentary committees during the special sessions that deal with certain controversies, like the military’s delayed response to the defection of two North Koreans through a wooden boat on the country’s eastern coast and rust found in tap water in Incheon.

The intransigent stance taken by the LKP ultimately forced the DP and Bareunmirae Party on Monday to accept the LKP’s demands by agreeing to renegotiate the fast-tracked bills by discussing their respective positions and reaching a compromise.

Yet the lack of assurances as to when and how this renegotiation would occur appears to have swayed the LKP lawmakers to vote against their floor leader’s deal.

While the compromise also addressed the LKP’s demand for a parliamentary hearing on the economy in the form of a panel debate between economic officials and lawmakers moderated by National Assembly Speaker Moon Hee-sang, this agreement was also turned down as insufficient by rank and file LKP lawmakers.

Foreshadowing the LKP’s decision to reject the compromise was the fact that no members of the party took part in a speech delivered by Prime Minister Lee Nak-yon at a plenary session at National Assembly at around 5 p.m. on Monday, in which he appealed for the necessity of fiscal expansion to follow through on the government’s economic policies this year.

The DP and three minor parties slammed the LKP for its sudden about-face, which now puts legislative proceedings for the summer - not to mention the government’s request for a supplementary budget - in doubt. While the DP and the other three parties said they would continue regular committee proceedings, the LKP’s boycott makes it impossible to form a special parliamentary budget committee tasked to review the fiscal proposal.

“This action is a direct betrayal of the public’s wishes for the normalization of National Assembly proceedings,” said DP floor leader Rep. Lee In-young. “It was an unexpected event that [the LKP] would flip over a written agreement [just hours later].”

Lee added that before any further negotiations resume with the LKP, the party first has to resolve the differences between its leadership and rank and file.

Some analysts have suggested that the lawmakers’ vote to reject Na’s agreement with the other parties represented a revolt against her leadership as floor leader.