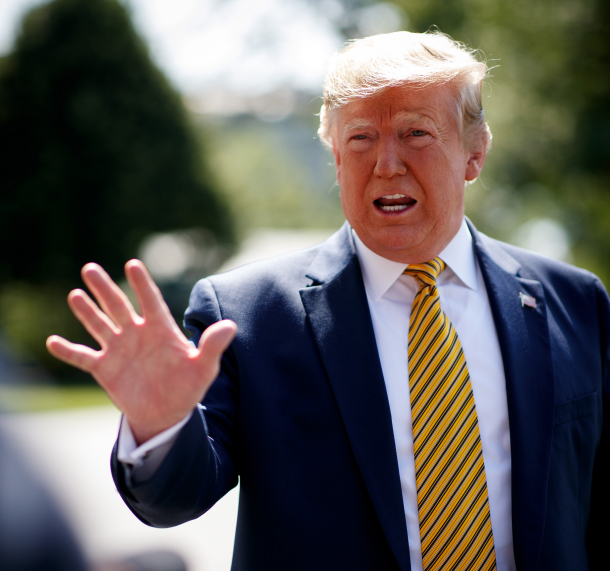 Trump will make an official visit to Korea for two days on Saturday and Sunday, Ko Min-jung, spokeswoman of the Blue House, said Monday. She said South Korean President Moon Jae-in invited Trump during their last meeting in Washington in April.

“Trump will arrive here Saturday afternoon,” Ko said. “He will have a summit at the Blue House the next day and have an in-depth discussion on the Korea-U.S. alliance and ways to use close bilateral cooperation to build a permanent peace through a complete denuclearization of the Korean Peninsula.”

Trump will leave for Washington later on Sunday from the U.S. military’s Osan Air Base, Ko said.

Ko refused to discuss other details of Trump’s visit to Korea. “Korea and the United States are continuing consultations on Trump’s specific itinerary,” she said. “When the specifics are finalized, we will make an announcement again.”

Speculation is running high that Trump will visit the demilitarized zone. On his first presidential trip to Korea in November 2017, Trump tried to visit the DMZ, but his helicopter had to return due to bad weather.

Some North Korea experts wondered whether Trump will meet Kim at the truce village of Panmunjom, located at the heavily guarded inter-Korean border.

Asked about such a meeting, a senior presidential aide gave an ambiguous answer. “We don’t know,” the official said, instead of denying the possibility, fueling speculation that some discussions are ongoing between Washington and Pyongyang.

The official, however, made clear that Moon will not be meeting Trump and Kim in Panmunjom. “There is no plan for a trilateral summit among Moon, Kim and Trump during Trump’s stay in Korea,” the official said.

Earlier in the morning, former Unification Minister Jeong Se-hyun predicted that there was a high possibility of a Trump-Kim meeting in Panmunjom on Sunday.

“I was told that Trump will visit the DMZ during his trip to the South,” Jeong said during an interview with TBS Radio in the morning. “Trump will reportedly arrive here on Saturday afternoon and then have a summit [with Moon] Sunday morning. He is reportedly going to the DMZ around 2 p.m. on Sunday.

“Trump can meet with [Kim] around 2 p.m. or 3 p.m. at Panmunjom,” Jeong said. “And there is no reason to stop him from crossing the border to enter the northern side of Panmunjom. It will make headlines in the world news.”

Panmunjom, located in the Joint Security Area of the DMZ, is the only place where the soldiers of the two Koreas stand face-to-face. The area, bisected by the military demarcation line separating the two Koreas, was the venue of Moon’s first summit with North Korean leader Kim on April 27 last year. At the time, Moon crossed the border into the northern side for 10 seconds in a symbolic gesture of peace.

The Washington Post reported similar speculation. “Trump will travel to South Korea’s capital, Seoul, June 29-30, and some experts had suggested he might even try to arrange a meeting with Kim at the border between North and South Korea - although that would give the two sides no time to prepare,” it said Sunday.

North Korea said Sunday that Kim had received a “personal letter” from Trump, weeks after the U.S. president announced that he had received a “beautiful letter” from Kim on June 11. That ended months of deadlock between Washington and Pyongyang following the collapse of the second summit in Hanoi, Vietnam, in February.

Former Unification Minister Jeong said Monday that the exchange of the letters between Trump and Kim hints at a surprise summit in Panmunjom. Moon, on June 13, said Kim’s letter to Trump included a very interesting element, which Trump had not made public. While the Blue House refused to elaborate on the detail, Jeong said Kim must have proposed to meet, and Trump must have replied that he would visit Seoul and they could meet in Panmunjom.

Jeong said a photo released by the Rodong Sinmun on Sunday, which showed Kim closely reading Trump’s letter, is also a signal to Washington.

The Asahi Shimbun reported Sunday that the U.S. and South Korean governments were in the process of fine-tuning details for Trump’s visit to the DMZ. Quoting sources from Seoul and Washington, the newspaper said Trump will head to the DMZ, using a helicopter, after his summit with Moon at the Blue House.

Trump will visit Korea after attending a Group of 20 summit in Osaka, Japan, on Friday and Saturday. He will meet with leaders of major countries - including Chinese President Xi Jinping - on the sidelines of the event. Xi visited Pyongyang and met with Kim last week.