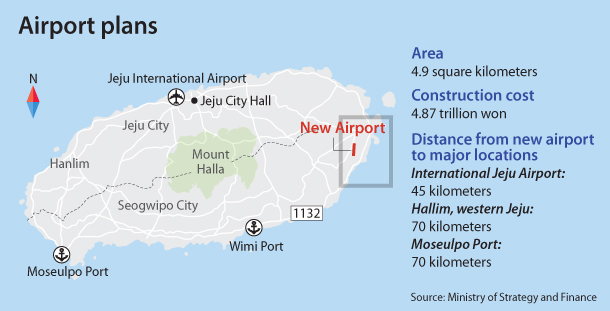 The Transport Ministry finalized its plan to build a second airport in Jeju Island, which has met fierce opposition from Jeju residents.

The Ministry of Land, Infrastructure and Transport held a meeting Tuesday at the Sejong government complex to make a final report on its plan for the construction of a second airport on the resort island.

According to the plan, the one-runway airport will be built by 2025 in Seongsan-eup in eastern Jeju and cover an area of 5 square kilometers (500 hectares).

The ministry is hoping to use the new airport for 50 percent of domestic airline travel to Jeju while the existing Jeju International Airport will be used for all international flights.

The Land Ministry must now consult with the Jeju government and other ministries before it receives final approval from a government body of experts. It expects to complete the entire process by October.

The government is responding to increasing demand for travel to Jeju and overcapacity at the current airport.

At the meeting Tuesday, the government explained the need to build an additional airport on the island, saying the existing airport is the second busiest in the world among airports with only one runway.

It added that the airport’s runway capacity rate, which measures the possible number of arrivals and departures on the runway, is at 98 percent.

The second airport, however, faces stiff resistance from local residents worried about the environment and the livelihoods of such groups as farmers.

While the meeting was originally scheduled to be held on Jeju on June 19, that plan was scrapped due to heavy protests from Jeju residents.

The government has tried to appease opposing residents, conducting two additional studies last year on the construction of the airport.

The decision to hold the meeting in Sejong instead of Jeju drew ire from opponents and some protested the plan at Jeju City Hall on Tuesday. Jeju governor Won Hee-ryong has repeatedly expressed support for the plan, arguing that it will help the island’s economy.