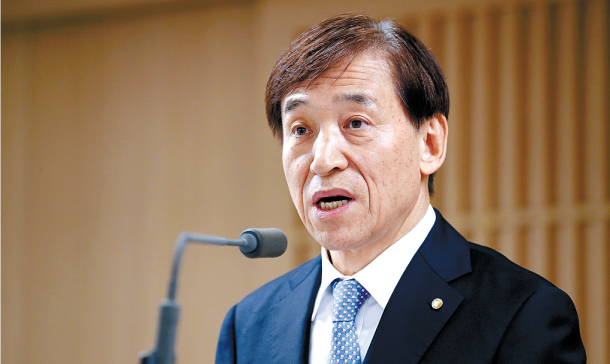 Bank of Korea Governor Lee Ju-yeol delivers a speech on Tuesday during a meeting with reporters at the bank’s office in central Seoul. [YONHAP]

“This year’s inflation will remain below April’s forecast,” Lee said during a luncheon meeting with reporters on Tuesday. “The low inflation is affected by different structural problems.”

The country’s consumer prices in May increased 0.6 percent over a year ago, locked below one for a fifth straight month despite higher import prices and hikes in grocery prices.

The central bank chief cited the government’s welfare policies, the growing use of online malls and plunging oil prices as the main factors pushing down the consumer prices.

Alongside the inflation issue, the major focus was on whether Lee would send a stronger signal for the need to cut the key interest rate, but the governor restated the previous stance without further comment.

“[The BOK] will act appropriately in response to the fast-changing economic conditions including trade tensions between the United States and China and the state of the semiconductor industry.”

The remarks echoed his previous comment earlier this month that hints at a possible interest rate cut.

Asked whether the central bank has sufficient room for monetary policy adjustment, he said “While [the BOK] responds to the fallout of the global financial recession, the key interest rate came lower at 1.75 percent. In this sense, we don’t have much room.”

With the grim economic outlook and the subsequent switch toward more expansionary monetary policy from major economies’ central banks, some expect the BOK to follow suit.

Korea was recently hit by a series of weaker-than-expected economic indicators in jobs, exports and investment.

The central bank said that consumer sentiment also slid slightly from a month earlier to a five-month low in June in the face of sluggish exports triggered by an economic slowdown and a trade dispute between the world’s two largest economies.

The Bank of Korea (BOK) said that the composite consumer sentiment index (CCSI) for this month stood at 97.5, down 0.4 points from the previous month.

A reading above 100 points indicates that a majority of survey participants have a positive outlook on the economy, while a reading below 100 indicates that most have negative views.