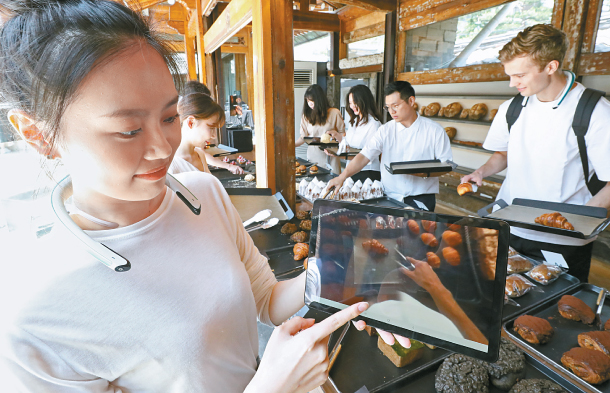 KT is offering the world’s first 5G wearable 360-degree camera starting Friday as it strives to be at the forefront of the 5G era.

The device is targeted toward live broadcasters, such as YouTubers, interested in live-streaming 4K ultra-high-definition videos, KT said.

“We live in an era where everyone becomes a YouTuber,” said Sung Eunmi, vice president of 5G services in KT’s marketing group. “With FITT 360, people can share high-quality videos with their hands free and liberate themselves from the rectangular frame of normal cameras.”

The U-shaped device, worn like a necklace, comes with two cameras in the front and one in the back. Each camera captures 120 degrees of the full view and the feeds are stitched together to achieve a 360 degree panorama.

The stitched-together footage can be shared instantly through KT’s “Real 360” smartphone application. The application can connect to smartphone contacts for video calls and social media accounts for live broadcasting.

As the high-resolution videos require so much bandwidth, 5G technology is essential to transmitting the streams, Sung said.

Freed from holding a camera or a selfie stick, YouTubers can bring more action to their channels and more entertainment to their viewers, she added.

As for viewers, they can scroll around the live-streamed video to shift to one section of the whole shot.

Although KT is the company marketing and selling the 360-degree camera, a start-up named Linkflow developed and has manufactured the device with the support of KT’s “Open Innovation” start-up incubator program.

During a 13-month collaboration, Linkflow developed the wearable neckband camera while KT developed a smartphone application to facilitate its use.

The mobile carrier will provide a 99,000 won discount for customers during the first month.

Sung said the telecom company is planning to release more affordable 360-camera options in the future to widen the appeal of the product.