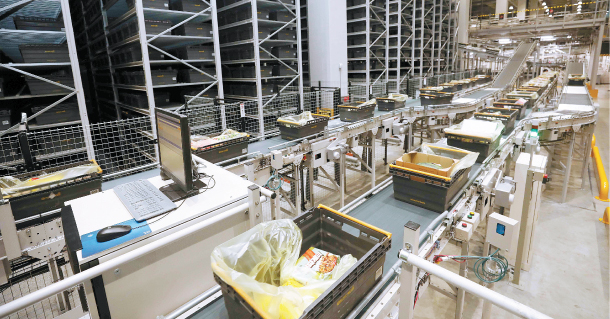 SSG.com already operates “good-morning ssg” delivery. Customers can receive packages between 7 a.m. and 9 a.m. The new early morning delivery takes the model a step further. Packages will be on the stoop by 6 a.m.

The company will start the service in 10 districts in Seoul, including Gangseo, Dongjak and Gangnam.

“We have long believed in the need for the dawn-delivery service, but were forced to delay the plan due to cost efficiency issues,” said Kim Ye-cheol, marketing & merchandise senior vice president at SSG.com, at a press event held in Gimpo, Gyeonggi, on Tuesday. “We’re launching the service now that our systems, like the cold chain system, have been reinforced.”

The cold chain system keeps fresh produce refrigerated from the warehousing through delivery.

At NE.Os, 80 percent of the processes, from receiving orders to delivery, are automated. Before NE.O, employees had to go to stores to pick up the goods that were ordered online. The company has 1,900 employees specializing in picking up the goods. Human errors occur, and even the experienced pickers were only able to handle 30 packages per day maximum, according to SSG.com CEO Choi Woo-jung.

“Under the traditional system, increased sales inevitably resulted in increased cost. With NE.O, however, items are delivered to the pickers, and they just pick up the goods and place them in boxes,” said Choi.

SSG.com ultimately plans to build up to six NE.Os in the capital area, and five in suburban areas. Depending on sales, it says it will open up to 20 for the full national coverage.

SSG.com can deliver a total of 10,000 items by dawn. Among them, 8,000 are food products, which are seen as the key items to make dawn delivery successful. This is twice the amount offered by its rivals.

Coupang offers 4,000 food products as part of its early morning delivery service. Market Kurly, which pioneered and is leading the dawn-delivery market, refused to disclose how many of its 7,000 items offered for the dawn delivery are food products.

For now, SSG.com can handle 3,000 packages per day by dawn. The company expects the volume to rise to 5,000 by the end of the year, and to 20,000 by the end of next year following the opening of the third NE.O.

The packages will be delivered in recyclable insulated bags. Excessive use of disposable packaging, which goes against the eco-friendly consumption trend, has been a controversial issue in the retail industry.

“We believe the use of the recyclable insulated bags will ease the guilt some consumers feel when placing orders to be delivered by dawn,” said Kim.

The insulated bag is free for first-time customers. The buyer can place the bag in front of the door for their next purchase.

The market size for dawn delivery grew exponentially from 10 billion won ($8.7 million) in 2015 to an estimated 400 billion won last year, according to the Rural Development Administration.

Although industry insiders agree with the growing importance of the dawn-delivery service, whether it is worth such large investment is questionable.

“Online transactions last year broke 110 trillion won,” said an industry source. “The size of dawn-delivery market only stands at 400 billion won as of last year. Although dawn delivery adds a means for retailers to expand their service, its importance seems to be overrated.”

SSG.com invested 150 billion won in its second NE.O and expects to spend a similar amount for its third distribution center. Coupang refused to reveal the amount it has invested to establish the infrastructure to make its dawn delivery possible.

Despite concerns, demand is forecast to grow.

“Although the dawn-delivery market is still in the initial phase, the increasing availability of such services is expected to further raise the demand in coming years,” said Seo Yong-gu, a professor of business at Sookmyung Women’s University.

Since Market Kurly initiated dawn delivery in 2015, a slew of others, including Hyundai Department Store, GS Fresh and Lotte Mart, as well as smaller retailers like Oasis, an up and coming retailer that delivers organic foods, have joined the competition - although the delivery time and the time for the last order differ.

The winner is seen as the company able to offer the most items.