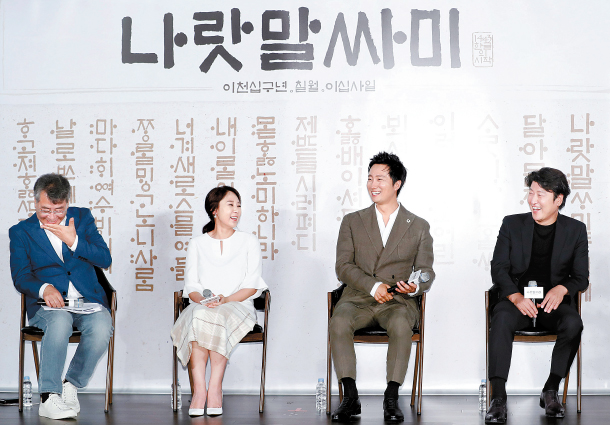 From left, director Cho Chul-hyun, and actors Chun Mi-sun, Park Hae-il and Song Kang-ho sit at the press conference held at Dongdaemun branch of Megabox in central Seoul, for their latest film “The King’s Letters,” set to be released in theaters on July 24. [NEWS1]

Before anyone has seen a minute of the upcoming “The King’s Letters,” all of the talk about the film has focused on the film’s three stars: Song Kang-ho, Park Hae-il and Chun Mi-sun. The trio of actors have been reunited for the first time since their work together in “Memories of Murder” (2003). Added with the fact that Song plays King Sejong the Great and the story of how hangul was created in the final eight years of the king’s life, local audiences are buzzing with excitement.

“I finally escaped the underground basement to travel back some 600 years to play the role of one of the greatest kings in of all Korean history,” said Song, alongside Park, Chun and director Cho Chul-hyun at a press conference for the film held on Tuesday. “When I read over the script, I could truly sympathize with the king’s brimming desire and determination to make the country as culturally prosperous which ultimately led to the creation of Hangul. We have only known the result of his legacy, but have never actually felt the loneliness and pain the king had to go through during the process.”

The film is Cho’s directorial debut, but he has been thinking about the movie for the last 15 years. He’s worked in the film industry for 30 years as a scriptwriter and a producer. Cho has always thought that the most profound achievements of the nation were the Tripitaka Koreana, the complete collection of Buddhist scriptures carved on over 80,000 woodblocks and stored for over 760 years, and the Hunminjeongeum, the initial name of hangul created by King Sejong in 1443. When Cho found a link that connects the two, he felt that he could spin a tale that was both enrapturing and historically meaningful.

“There are many rumors and theories behind hangul’s creation,” said Cho. “We focused on one of them to develop, which is that there was a hidden helper who played a critical role in assisting the king create the language.” While the director dug into his research for the film, he found that monk Shin-mi was mentioned 69 times in the Annals of the Joseon Dynasty (1392-1910), which he thought was no mere coincidence. More questions followed his search, such as why the Hangul creation project was kept a secret from rest of the king’s other loyal subjects.

“I came to understand that the project [had to] be top secret if the king of a Confucian country and a Buddhist monk were collaborating to establish a national letter system.” 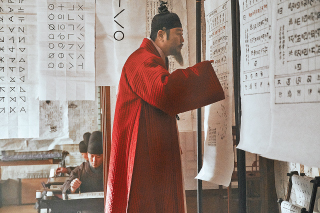 Although Shin-mi was mentioned dozens of times in the records, Cho found no positive remarks about the monk, which led him to believe that there was a reason why the Buddhist’s name still crept up so often when it was almost historically impossible for a monk to be recorded in the official records of Confucian country.

The director also had personal reasons for wanting to bring his discovery to film. “My mother’s deepest regret was that she was illiterate,” the director said, seemingly at a loss for words as he fought back tears.

In a preview clip shown at the press conference, beautiful backgrounds that balance nature and Unesco World Heritage sites, where some of the film was shot, are seen. Some scenes in the movie were filmed at Geunjeong Hall and the Main Throne Hall of Gyeongbok Palace, central Seoul, Haein Temple in Hapcheon County, South Gyeongsang, which houses the Tripitaka Koreana, and Muryangsu Hall of Buseok Temple in North Gyeongsang.

“I remember the scenes [we filmed] inside Haein Temple, because it was a once-in-a-lifetime experience, even for an actor,” Park, who plays the Shin-mi monk in the film, said. “It definitely wasn’t an easy process to attain permission from the Cultural Heritage Administration to film at these precious sites. But the production crew managed to convince the organization by explaining the motive of our work.”

The actor added that the heritage sites became almost like a secondary character in the story that distinguishes their film from other movies.

Chun agreed that the beauty of the backgrounds is something worthwhile to see on screen. However, even before it was confirmed that the movie was going to be filmed at some of the country’s most well-known heritage sites, she was immediately taken with the character of Queen Soheon.

“[In the script] she was the person who I wanted to become,” the actor said. “The queen is someone who constantly encourages the king and the monk to create hangul.” She also liked the fact that the queen’s contribution was emphasized in the story, which differentiates the character from other historical dramas in which female characters tend to remain passive, or are sub plots to spice up the story.

“I don’t believe that spoilers actually ruin the film,” Cho said. “For this film, I want the audience to really do their research and know the history before they see it. And when they see the film, I want people to focus on the feel and atmosphere instead of the plot.” He believes that having knowledge about history will make the film more entertaining.

“The King’s Letters” is slated to hit the theaters on July 24.