REVIEW: ‘School of Rock’ is a wonderful surprise

REVIEW: ‘School of Rock’ is a wonderful surprise 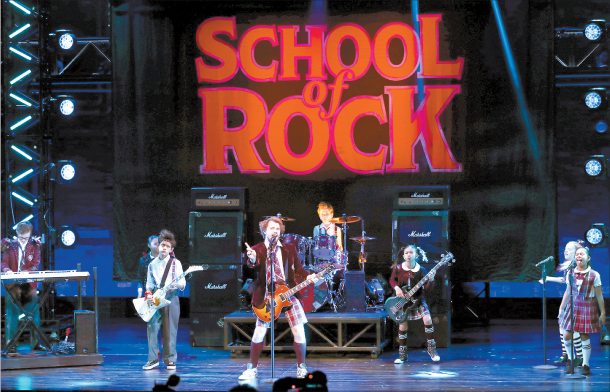 The international tour production of “School of Rock” is currently being staged at the Charlotte Theater in Jamsil, southern Seoul. [YONHAP]

Knowing that the cast of “School of Rock” is made up of teenagers, you wouldn’t be blamed for walking into the theater expecting to watch the musical with a gleaming eye of a parent, ready to accept any mistakes made. Yet the children in the cast of the international tour production of the musical currently being staged at the Charlotte Theater in Jamsil, southern Seoul, perform so professionally that you will find yourself doubly amazed by what’s happening on stage. None of them were born in the rock ’n’ roll generation, but the spirit they show while playing their instruments is no less than any rock star.

When famous composer Andrew Lloyd Webber decided to adapt the popular film of the same name starring Jack Black as Dewey Finn, the substitute teacher with no teaching experience who gets assigned to a prestigious school, the first thing he had to do was to find a creative team that “gets rock.” It was not that difficult for him, according to his notes, to find Laurence Connor who “passionately loves and understands heavy metal” to direct the musical. It also wasn’t hard to get American lyricist Glenn Slater to join the creative team because he is a longtime rock fan. Collecting a team of people around his age to recreate the musical film on stage was something that he could plan and control, but bringing the natural rock spirit out of these young children, and teaching them the empowering and unifying force of music through this process is something that Webber and the creative team deserve praise for.

Each young cast member is so amazing, and I wish I could list all their names.

Conner Gillooly, playing Dewey Finn, also deserves a lot of credit for making this musical a must-see for Koreans since its opening on June 8. Jack Black’s Dewey is such a powerful character and he has a special place in Koreans’ hearts - so many people, including myself, go into the theater not expecting that Gillooly will be able to pull off the character in a manner that is as funny and energetic as Black. Gillooly never tries to impersonate Jack Black, which allows the audience to forget about the film character and fall in love which his interpretation.

Perhaps it was the low expectations I had - thinking that the musical would never be able to replace the joy of the film and considering the potential mistakes that the young cast might make during the performance - that allowed me to enjoy this musical.

Whatever the reason, the musical definitely got rid of my after-work stress on a Wednesday evening. The musical runs until Aug. 25.