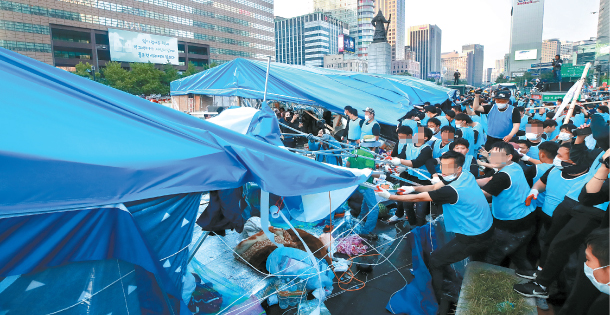 Workers dispatched by the Seoul city government remove tents set up by the Korean Patriots Party at Gwanghwamun Square in central Seoul on Tuesday morning. [YONHAP]

Members of a minor far-right party again pitched tents to continue their sit-in rally at Gwanghwamun Square in central Seoul on Tuesday, just a few hours after the tents were removed by the Seoul city government.

Seoul Metropolitan Government from around 5 a.m. to 9 a.m. demolished the tents, which have occupied the square since May 10 by members of the Korean Patriots Party. The party has been calling for the release of imprisoned former President Park Geun-hye, who was impeached in 2017 and sentenced to 25 years in prison in August last year for corruption and power abuse.

The city government said it asked the party to remove their tents voluntarily and sent them three warnings, saying that if they don’t remove the tents and stop the illegal sit-in, the city government will force them out of the square through an administrative order.

There were around 250 to 300 people participating in the sit-in at the time of the removal of the tents, many of them members of the party. Around 2,270 city government officials, workers and police officers removed the tents.

The party members put up a fight, and in the scuffles that ensued, around 40 participants in the sit-in were injured, according to the Korean Patriots Party.

The protesters then continued their rally in the square without the tents.

“We intend to reinstall our tents,” Song Young-sik, director of external relations of the party, told the JoongAng Ilbo over the phone on Tuesday morning.

There were Seoul city government officials and police officers on site, but some party members, in some five-minute time frame, engaged in scuffles with them, while other members forcibly installed three tents.

“In this scuffle, two officials were injured and sent to hospitals,” a city government official told the JoongAng Ilbo. “We’ll stage the rally into the night and keep our area safe,” Song said.

The city government said it will remove the tents again following legal procedures. “We will go through the normal process, as we did, and send them warnings before we act on removing the tents,” Baek Woon-seok, head of the urban regeneration policy department of the city government, told the JoongAng Ilbo. “There are over 500 participants engaged in the sit-in rally at the square. We will try to minimize physical scuffles with them.”

“The square is a public space and a space for the people,” said Kang Maeng-hoon, head of the urban regeneration bureau. “We removed the tents because they were using the space, which is for everyone in Seoul, illegally.”

Some people showed their support for the city government’s decision on social media. “Great news to start the day with,” one user wrote on Twitter, posting an article about Seoul city government removing the tents.

“What a relief,” posted another user, along with a video of the city government officials demolishing the tents. “They’re finally tearing it down.”