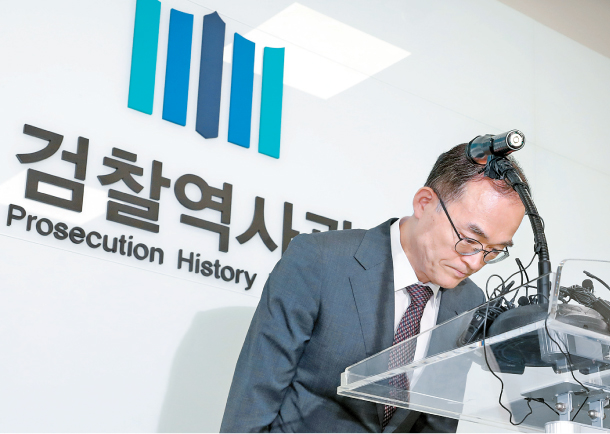 Prosecutor General Moon Moo-il publicly apologizes for the shadowy past of Korea’s prosecution at a press conference at the Supreme Prosecutors’ Office in Seocho District, southern Seoul, on Tuesday. [JANG JIN-YOUNG]

In one of his last acts as prosecutor general before the end of his term next month, Moon Moo-il publicly apologized Tuesday for the shadowy past of Korea’s prosecution.

In a press conference at the history exhibition hall of the Supreme Prosecutors’ Office in southern Seoul, Moon acknowledged the results of a truth-finding commission that recently finished its probe into 17 different past cases that prosecutors were accused of covering up or of failing to maintain political neutrality.

“I painfully accept the results of the commission’s investigation, and - though belatedly - bow my head in sincere apology to the victims who have suffered greatly,” Moon said.

“By failing to strictly uphold neutrality in politically sensitive cases or reveal the truth behind cases subject to widespread public doubt […] I feel great responsibility.”

Moon also pledged to reform legal institutions and guidelines within the prosecution to ensure that authority is not misused, the fairness and neutrality of investigations is maintained, and that democratic principles would take root in the criminal justice process.

The commission, launched by the Justice Ministry a year and half ago in December 2017, ended its investigation in late May after looking into the prosecution’s controversial approach to a series of high-profile cases.

These cases include a sex scandal involving former Vice Justice Minister Kim Hak-eui, a brutal police crackdown on a group of around 40 tenants forcibly evicted from their homes in 2009, known as the Yongsan tragedy, and the operation of a forced labor camp in Busan, known as Brothers Home.

Regarding eight of the 17 cases, the commission concluded that prosecutors had deliberately held back from conducting proper probes for a variety of reasons or had been involved in the violation of human rights.

Moon on Tuesday admitted in particular that prosecutors had failed to do their duty in uncovering sufficient evidence to indict former Vice Justice Minister Kim for corruption and receiving sexual favors - allegedly as a result of political pressure from the Park Geun-hye administration - in 2013.

Kim was indicted and detained earlier this month after prosecutors reopened his case based on the commission’s recommendations this year.

The Yongsan case, he added, warranted that prosecutors reveal the results of their probe into their inquiry, which they failed to do. Prosecutors at the time left many questions unanswered when they wrapped up their probe into the deaths of five evictees and one police officer who died after a fire broke out during the clash between tenants and riot police.

Yet Moon added he would have to look into whether to make a public apology to each of the victims of the incident, given that it is unclear whether prosecutors truly neglected to conduct a proper probe.

Since his appointment as the country’s top prosecutor in July 2017, Moon has made several notable public apologies for the actions of Korea’s prosecutors in the past.

In November last year, he made a teary apology to the victims of rampant abuse and killings that took place in the 1970s and ’80s at Brothers Home, which was nominally operated as a homeless shelter but was used by authorities to round up the homeless, disabled and other “vagrants.”

Last week, Moon also met with the families of activists who died during the struggle for democracy in earlier decades and apologized for the prosecution’s role in enabling authoritarian crackdowns against democracy activists.

While these efforts by the outgoing prosecutor general have helped lift some of the long-standing doubts on the investigative body’s alleged abuses, some critics argue that the apologies may be intended to deflect attention from the political movement to reduce the powers of prosecutors, who have long been accused of using their authority for political motives.

Last month, Moon publicly objected to the ruling Democratic Party and its allies’ fast-tracking of several contentious bills on judicial reform, which would give some of the prosecution’s investigative authority to the police and create a new investigative unit to target crimes by top government figures.

After criticizing the Justice Ministry’s proposal to adjust some parts of the bill in response to criticism from prosecutors, Moon said in a press conference on May 17 that his organization would conduct its own internal reforms to decentralize power within the agency.