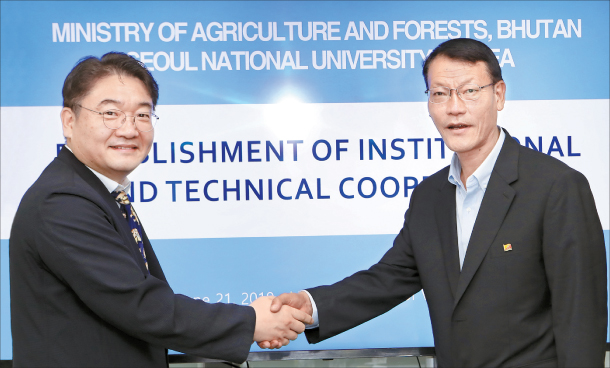 Seo Kang-moon, dean of the Seoul National University College of Veterinary Medicine in southern Seoul, left, and Rinzin Dorji, secretary of the Bhutan Ministry of Agriculture and Forests, shake hands after their meeting at the college on Friday to discuss building a wildlife rescue center in Bhutan. [PARK SANG-MOON]

Seoul National University’s (SNU) College of Veterinary Medicine and Bhutan’s Ministry of Agriculture and Forests are looking to open a wildlife rescue center in Bhutan.

“We are hoping to reach out to partners in other parts of the world to collaborate on veterinary medicine and science, and hence this project came about while I was visiting Bhutan in January this year,” said Woo Hee-jong, professor of veterinary immunology at the SNU College of Veterinary Medicine in southern Seoul. “The idea we originally proposed in Bhutan was to build a veterinary medicine college, but the Bhutan government told us that what is actually more needed on the ground is a wildlife rescue center.”

Members of the Bhutan Ministry of Agriculture and Forests visited the university on Friday to discuss details of the project.

“We were happy to receive the proposal from the university about establishing a veterinary medicine university,” said Rinzin Dorji, secretary of the ministry.

“But at the moment our needs are being met through services provided by the veterinary medicine hospitals. We have 30 districts in Bhutan and each district has a vet hospital.”

Skill and knowledge-sharing is needed, however, in the field of rescuing wild animals, the secretary said.

“There is a constant human-wildlife contact in Bhutan because of the rich wildlife species and ecosystem,” he said. “We are a country of very strong conservation ethics and we see a growing need to take care of the wildlife and contacts with humans.”

Bhutan’s constitution mandates that 60 percent of its land must be forest at any given time. Around half of the country is government-protected, according to the World Wildlife Fund (WWF).

The WWF and the Bhutan government began a project in 2018 called Bhutan for Life, which uses a $43 million fund to protect natural ecosystems and wildlife in Bhutan, which include endangered species such as Bengal tigers, snow leopards and Asiatic Elephants.

The SNU College of Veterinary Medicine is hoping to work with the Korea International Cooperation Agency (Koica) to build the rescue center through its official development assistance (ODA) program. Koica does not have an ODA program in Bhutan.

“The enlisting will have to come first,” Woo said. “We are working together on this matter.”

Bhutan has two wildlife rescue centers in the country, according to the secretary.

In addition to the project to build a Korea-Bhutan wildlife rescue center, the Forestry Ministry of Bhutan also suggested training programs in Bhutan for experts to share experiences and knowledge.

“More than anything else, we are in need of equipment [at the vet hospitals and rescue centers] and if they can be provided, Korean experts can come and teach us about how to use this new equipment,” Dorji said. “In exchange, the experts in Bhutan will be able to share their experiences rescuing different types of species of animals.”