The LG Twins’ Han Seon-tae once again made history on Tuesday. 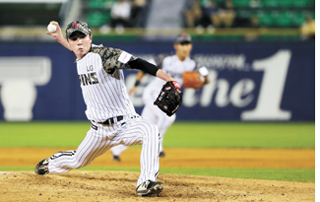 Han Seon-tae throws a pitch during a game against the SK Wyverns at Jamsil Baseball Stadium in southern Seoul on Tuesday. [ILGAN SPORTS]

During the Twins’ game against the SK Wyverns, Han, wearing jersey number 40, got on the mound as the team’s third pitcher at the top of the eighth inning, while the Twins were losing 3-7.

Han’s very first pitch in a Korea Baseball Organization (KBO) game was a wild pitch. In his third pitch against the Wyverns’ Lee Jae-won, Han gave up a hit. Han gave away three straight balls to An Sang-hyun, the second batter, before finally throwing his pitch inside the strike zone. Then, An hit off a sixth pitch against Han, which ended up being a grounder, quickly allowing Han to take two out counts.

Han allowed a walk to Kim Sung-hyun as it was a hit by pitch, but quickly ended the inning with a ground out from Ko Jong-wook.

In Han’s debut, he gave up a hit and a hit by pitch throughout an inning but ended without giving up a run in 17 pitches. Han’s fastest pitch speed was recorded at 144 kilometers per hour (89 miles per hour).

That might not be the most impressive inning ever played, but the moment Han threw that first pitch he became the first player in KBO history to debut in the top league despite having never played baseball in high school.

“Halfway through the game, I was told by my older teammates to get ready mentally because I might get up there,” Han said. “I was told to warm up quickly. The first thought I had was how. Since I didn’t know how fast I had to warm up, I just went through the same routine as in the Futures League.”

“I heard the fans shouting my name and cheering for me. But I got so nervous that I didn’t hear anything else,” Han said.

As he watched the game, young Han decided that he wanted to be a baseball player. He headed to Bucheon High School in Gyeonggi, the closest high school to his home with a baseball team, to seek a spot on the squad.

He finally reached the KBO last year after the Twins picked him in the 10th round of the foreign returnees draft.