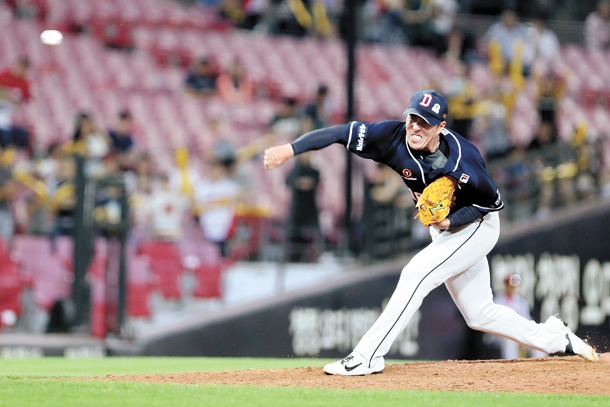 Kim Seung-hye of the Doosan Bears throws a pitch during a game against the Kia Tigers at Gwangju-Kia Champions Field in Gwangju on June 4. [NEWS1]

A baseball pitcher in their late 30s is normally winding down to retirement, but Doosan Bears’ pitcher Kim Seung-hye is just getting warmed up.

At 38, Kim is one of the oldest pitchers in the Bears’ bullpen, but this season is turning out to be the best of his career. Kim has already appeared in 40 games and pitched a total of 42 innings as of Tuesday.

Kim has played in a little more than half of the Bears’ games this season and has appeared in the second highest number of games among the Bears’ bullpen, after 24-year-old Lee Hyoung-beom.

But he’s doing a lot more than just turning up.

Although Kim has been given a tough schedule as the Bears’ star relief pitcher, he’s also managed to keep his stats low. As of Tuesday’s game, Kim has picked up three wins, two losses, two saves and three holds with a 2.36 ERA.

This is the lowest ERA Kim has ever had since making his debut in 2003. Also, since the start of this season, he’s recorded only one blown save.

Regardless of the numbers, Kim has also shown his dedication to the team, pitching in all sorts of difficult spots. Whether the team is losing, winning or the starter has left the mound earlier than expected, Kim is becoming known as the reliever that the Bears’ pitching coaches can turn to in any situation.

This season, the Bears’ Ham Deok-ju and Park Chi-guk have struggled, but Kim has stepped up to hold the bullpen together with his consistency.

Kim himself credits his recent success to his desperation to keep playing. His recent streak of good form is possible, he says, because he “has a bigger desperation for baseball than any others.”

Just as Kim said, he didn’t have the best start to his career. Playing as an infielder while attending Baemyeong High School, Kim switched to pitching while at Tamna University in Jeju.

Despite not having been on the mound for long, Kim was drafted by the Bears in the second round of the 2003 rookie draft. In his rookie season, he played in 34 games and picked up one win, three losses and six holds with an ERA of 4.38. He mostly played as a relief pitcher and occasionally appeared as a starter.

In 2013, Kim left the Bears and joined the Lotte Giants. The Giants took Kim as a compensation player after the Bears signed free agent Hong Sung-heon. With the Giants, Kim had his best season yet in 2014, picking up 20 saves with a 3.05 ERA.

However, as he wasn’t able to continue his hot streak in 2015, where he had a disappointing 6.24 ERA, Kim’s career with the Giants ended and he joined the SK Wyverns. Once again, he left to the Wyverns as a compensation player after the Giants signed free agent Yun Kil-hyoun at the end of the 2016 season.

Normally, pitchers’ ERA tends to rise as they get older. Kim is moving in a different direction.

“It’s not too tiring because our coaching staff’s been taking good care of the number of pitches,” Kim said. “Since I’m enjoying myself and concentrating on the baseball, I think I’m seeing good results. Our younger relief pitchers are playing really well. Our team has a great atmosphere and [I’m seeing] good numbers.”

Kim may only throw a fastball at 141 kilometers per hour (87 miles per hour), but he has a lot more than that in his arsenal. Last year, Kim relied heavily on curve balls, but this season he’s been throwing more change-ups and splitters. As he has the ability to toss a range of breaking balls, he’s an unpredictable pitcher for batters to face.

“Seung-hye is good with all of his pitches,” said Bears catcher Park Sei-hyok. “As a catcher, it’s great because I can ask him for various pitches. He has a great change-up this season, so I’ve been asking for that a lot.”

“I’m just pitching accordingly to what our catcher asks for,” Kim said.

While Kim was away from the Bears, the club won the Korean Series twice, in 2015 and 2016. Throughout Kim’s career with the Bears, they have had five runner-up finishes and no Korean Series win. Due to this, as the Bears are currently ranked second and very likely to advance to the postseason, they are more determined to win the title for the veteran reliever.

“Now, I’m just thinking that it’s great to win, but it’s fine if we don’t,” Kim said. “I’m just grateful for being with Doosan right now. My goal for the remaining season is to finish without any injuries.”