Kim Jeong-hui’s calligraphy “Endless Creek and Mountain” is part of the “A Dialogue between Kim Jeong-hui and Literati of the Qing Dynasty” exhibition, which recently began at the National Art Museum of China in Beijing. [SEOUL CALLIGRAPHY ART MUSEUM]

One of the shows, “Beyond Line: The Art of Korean Writing,” running at the Los Angeles County Museum of Art (Lacma) through Sept. 29, is “the first major U.S. survey to examine the history of Korean calligraphy,” according to the museum. The exhibition features about 90 works, including Buddhist scrolls from the Goryeo period (918-1392), seoye pieces by Confucian scholars of the Joseon period (1392-1910), as well as modern calligraphic works and contemporary art pieces inspired by seoye.

The other exhibition, titled “A Dialogue between Kim Jeong-hui and Literati of the Qing Dynasty,” is being held at the National Art Museum of China in Beijing through Aug. 23. It focuses on the scholar Kim (Gim) Jeong-hui (1786~1856), better known by his artist name Chusa, who is regarded as one of the greatest Korean calligraphers. Chusa is also featured in the Lacma show.

“Beyond Line” explores not only aesthetics but also social roles of calligraphy in Korea, by looking at the people who produced seoye pieces, such as royalty, monks and scholar-officials of the noble class called yangban. Calligraphy of hanja, or the Chinese ideographic-pictographic letters, and hangul are brought together to deal with their differences in aesthetics and social meanings. The show also highlights various mediums that carry seoye, including stone monuments, ceramics, as well as paper.

As the first in a series of exhibitions that are part of “The Hyundai Project: Korean Art Scholarship Initiative,” sponsored by the Korean auto giant Hyundai Motor, “Beyond Line” will present “critical new scholarship on Korean history, culture and identity through the lens of calligraphy,” Michael Govan, CEO and Wallis Annenberg Director of the Lacma said.

“This art form is both a conveyer of content and an abstract art of the highest degree of intellectual and artistic refinement,” he added. 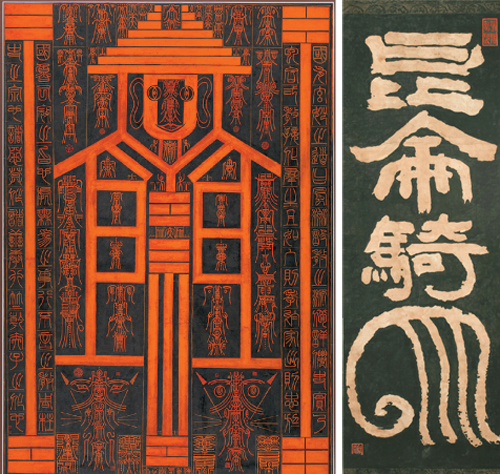 Kim Jeong-hui’s “Riding an elephant on Mt. Gonryun,” right, and Kim Jongweon’s contemporary art work from 2014, left, are part of the “Beyond Line: The Art of Korean Writing” show at the Lacma in Los Angeles. [HYUNDAI MOTOR]

This is best seen in Chusa’s calligraphic works, including “Riding an elephant on Mt. Gonryun,” which shows both writing and drawing in a free and playful manner.

The evolution of these characteristics in contemporary era are best seen in works by Kim Jongweon, calligrapher and director of Gyeongnam Art Museum in Changwon, South Gyeongsang. One of his works on view, which may remind viewers of a Korean traditional talisman, is filled with ancient hanja transformed by the artist into new symbols. They express his thoughts after reading texts by the 9th-century Korean philosopher Choe Chi-won, who asserted Confucianism, Buddhism and Taoism could be fused into a native religion.

“Lacma’s exhibition is unique in that its chronology goes past the Joseon dynasty (1392-1910) and into a contemporary context,” said Virginia Moon, assistant curator of Korean art at the museum. She curated the show with Stephen Little, head of the Chinese, Korean and South and Southeast Asian Art Departments.

Meanwhile, Chusa is also being celebrated in “A Dialogue between Kim Jeong-hui and Literati of the Qing Dynasty” co-hosted by the National Art Museum of China and Korea’s Seoul Arts Center. The show features more than 60 pieces of Chusa’s calligraphy and paintings. In addition, 25 pieces of writing by Chinese scholars, including Weng Fanggang (1733-1818) are on view.

“With the style, Chusa achieved oneness between academic study and art. In creating the style, he was helped by his conversations with the Chinese scholars.”

This is the second exchange program between the Korean and Chinese museums, following “A Dialogue with Qi Baishi” at the Seoul Arts Center earlier this year.