‘The Divine Fury’ has major plans ahead

‘The Divine Fury’ has major plans ahead 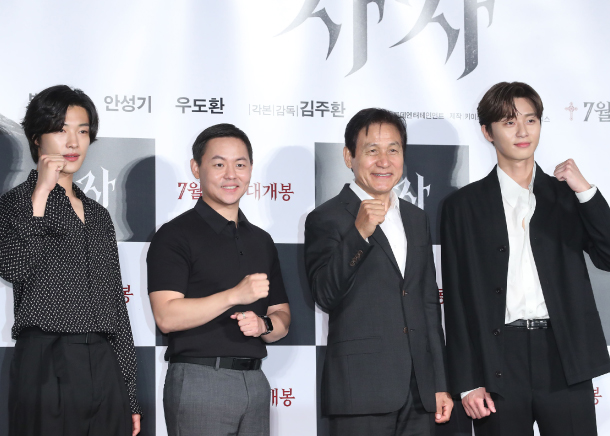 From left, actor Woo Do-hwan, director Kim Ju-hwan, and actors Ahn Sung-ki and Park Seo-jun pose for the camera at a press conference held at the Konkuk University Entrance branch of Lotte Cinema, eastern Seoul, on Wednesday. “The Divine Fury” is set to premiere on July 31. [YONHAP]

Director Kim Ju-hwan has big plans for his upcoming film, “The Divine Fury” - if it succeeds, he wants to create his own cinematic universe of stories that can be told over multiple films.

Kim was first inspired by the topic of exorcism when he saw a large sculpture of an angel pushing down a demon in France. The thought then hit him: How come the local film industry is devoid of its own cinematic universe, like Marvel or “The Conjuring” series? So he decided he would create it himself.

“We have all the state-of-the-art technology we need to create our own cinematic universe,” Kim said at a press conference that he attended with the film’s three stars - Park Seo-jun, Ahn Sung-ki and Woo Do-hwan - on Wednesday. “I wanted to create a universe in Korea where numerous characters can battle their way through, drawing out many sides of the characters that could earn empathy and love from the local audience.”

There have been other films on the topic of exorcism, such as “The Priests” (2015) and “Svaha: The Sixth Finger” (2019), but the director and rest of the cast assured that their work would probe deeper into the world of exorcism and provide more eye-opening visuals and fresh perspectives to entertain moviegoers.

Although Kim did not reveal specific details about the film, he intends to realize his ambitions if “The Divine Fury” is a success at the box office. He also hinted that he has more stories ready to grow the film into a franchise.

As for now, however, Kim explained the film as the story of a battle between good and evil, and the people who fight for their side according to their beliefs. The story starts off as Yong-hoo, a UFC champion played by Park, one day suddenly has a wound on his hand that does not heal. Although he visits various hospitals, the doctors tell him there’s nothing wrong with his body. When he hears from a source that his wound may be more of a spiritual matter, he is advised to visit an exorcist.

“Yong-hoo is a dark character with many scars from his past,” Park explained about his role. “I was worried about how to portray this character because I’ve mostly shown bright and humorous sides [in my previous works]. But I’ve always wanted to show a different side of myself, and I think I’ve managed to achieve that through this role.”

Ahn, a veteran actor, on the other hand, was captivated by his character, an expert exorcist sent from the Vatican City to clear the country of the ultimate evil.

“My character, who also goes by the surname Ahn, has a powerful aurora that remains unwavering despite his old age,” Ahn said. “I wanted to give off that strong energy on screen that only the most experienced exorcist who has seen all sorts of evil would have.”

For Woo, this will be his first lead role on the big screen, but the actor had portrayed various sly or bad roles in drama series and films.

“The character I play is an evil spirit who takes on human form to manipulate others,” he said as he introduced his character. “He is evil, but a different kind of evil from other roles I’ve portrayed because he is very clever. He quickly sees through others’ weaknesses and uses them for his own gains.”

The director emphasized that the last four minutes and 30 seconds of the film are the climax of the story and that the audience should be prepared to be impressed. “We used all the latest CGI technology, special effect makeup and wiring to create the ultimate battle between the two main characters - Yong-hoo [Park] and the evil spirit [Woo],” Kim said.

“The film was definitely a challenge for all of us, and we did our best to create a suspenseful flick that the people can’t bear to take their eyes off.”