Irish NGO has fought poverty in North for years

Irish NGO has fought poverty in North for years 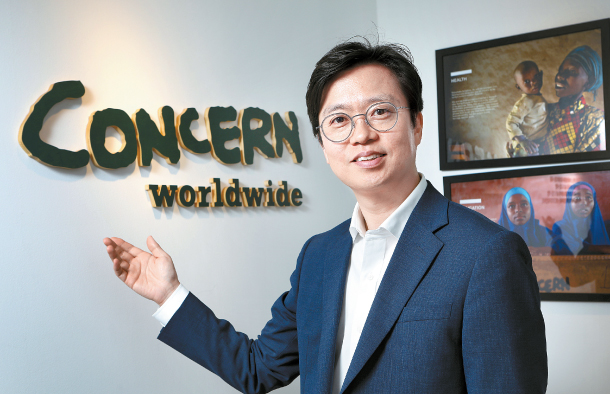 Lee Jun-mo, country manager of the Korean office of Concern Worldwide, speaks with the Korea JoongAng Daily at the office in western Seoul recently about the Irish nongovernmental organization’s work on the ground in North Korea. [PARK SANG-MOON]

Governments and humanitarian organizations around the world are announcing their plans to send aid to North Korea after the United Nations (UN) released a report on the unprecedented level of poverty and starvation in the country in March.

But some experts are posing the question of how sustainable this aid will be.

“Concern Worldwide was able to provide aid to the North without a hiatus because it remained politically neutral,” said Lee Jun-mo, country manager of the Korea office of Concern Worldwide, an Irish organization that has been assisting the people of the North for over 20 years. “Ireland was also mute about its aid to the North for ages. But the fact that it provided around $113,000 for aid to North Korea in March shows that it has been paying a close attention to the state of hunger and poverty in the country.”

The UN reported in March on the unprecedented level of poverty and starvation in North Korea, stating that an estimate of 11 million of North Korean men, women and children “lack sufficient nutritious food, clean drinking water or access to basic services like health and sanitation.”

Fida International, the Finnish NGO that has been working in North Korea for over 20 years, announced earlier this month its intention to leave North Korea due to the strengthening of U.S. sanctions on the North.

“Fida has acted in accordance with international sanctions policy,” the organization said in its press release on June 10. Although the UN sanctions on the North have not banned humanitarian activities, materials used in these activities can be subject to sanctions.

Concern Worldwide was one of three organizations granted waivers by the UN to continue to deliver food aid into North Korea earlier in the year.

“We have been working in North Korea from 1998 to now,” Lee said. “Our main focus has been on WASH [water, sanitation and hygiene] and food aid.”

Lee sat down with the Korea JoongAng Daily recently to discuss the ethics of food aid and humanitarian assistance to North Korea. The following are edited excerpts of the interview.

A. Concern Worldwide is an international humanitarian organization tackling the root causes of extreme poverty and hunger. Our first action was humanitarian aid for the Biafran Famine in Nigeria in 1968. Since then, we have entered the most vulnerable countries such as Ethiopia, Somalia, North Korea, Syria and Central African Republic to save lives. Concern Worldwide Korea was set in 2015 as the fifth branch office following Dublin, Belfast [Northern Ireland], London, and New York.

Tell us about Concern’s work in North Korea.

We have been working in North Korea from 1998 to now. Our main focus has been on WASH [water, sanitation and hygiene] and food aid, but we have also assisted with what we call DRR, or disaster risk reduction, which would include building the necessary facilities to prevent flooding in a vulnerable area, or building community centers for people to use as shelters during floods.

What is Concern’s assessment of poverty and starvation in North Korea?

After repeated seasons of flood, drought and sanctions, the state of hunger in North Korea has reached a dire stage. The reports of the UN’s Food and Agriculture Organization and World Food Programme pointed out that the rate of food production in North Korea has reached an all-time low in 10 years. Concern Worldwide with Welthungerhilfe announced in the Global Hunger Index in October 2018 that the rate of starvation in the country rose from the 27th worldwide in 2017 to the 11th in 2018. Other countries included in the list were Nigeria, which ranked 17th, and Mozambique, which ranked 18th.

After the UN released its findings in March on starvation in North Korea, governments around the world, including that of South Korea, announced their intention to send aid to the North. But in Ireland’s case, it decided to send aid via its NGO, Concern Worldwide. Is there a particular reason for that decision?

Among the bilateral official development aid [ODA] of Ireland, 43 percent is sent out via its NGOs including Concern Worldwide. This is the highest rate among countries around the world - according to the numbers that we have, countries on average send about 16 percent of their bilateral ODA through NGOs and in South Korea’s case, just 2 percent.

Ireland could send so much of its ODA through Concern because the NGO’s policies and methods try to reflect much of the Irish government’s as a partner. As is the motto of the Irish government when it comes to aid abroad, Concern has worked in North Korea quietly and consistently through some of the difficult times due to sanctions or political tensions.

Does Concern Worldwide share the view of the UN Food and Agriculture Organization’s economist Mario Zappacosta, who said in a recent interview not to mix political issues with humanitarian ones?

The reason why Concern could stay in North Korea all these years and support the North Korean people was because we separated the humanitarian issue from the political one. In some countries there is a need for advocacy work to change the political climate, like for instance the case of the Rohingya people in Myanmar, but North Korea is an exception.

Concern Worldwide was able to provide aid to the North without a hiatus because it remained politically neutral. Ireland was also mute about its aid to the North for ages. But the fact that it provided around $113,000 for aid to North Korea in March shows that it has been paying close attention to the state of hunger and poverty in the country.

How sustainable is Concern’s work in the North?

Sustainable aid, by definition, means that the people who receive a type of assistance are informed and trained and supported to be able to provide for themselves after the assistance has been provided. This includes providing the people with agricultural tools and teaching them to farm and take care of livestock. Then we would help the North Korean people form local communities to share information or train others so that the positive impact is multiplied for more people in the society, with the end goal of ending poverty in a community, region and the nation.

Many of the organizations that have consistently provided aid to the North are based in Europe.

That is because most of the North American-based and South Korea-based organizations have left the North. This is why some officials in the UN call North Korea the forgotten country.

Humanitarian organizations like Save the Children, Oxfam, Salvation Army, Welthungerhilfe and Concern Worldwide were born in Europe and some of them have been relatively free from political issues in supporting North Korea partly because of their geographical location and partly because of their [host countries’] national identities. These organizations were born in countries that have experienced a history of unification and peace-building process - like Ireland or Germany - so there is a deep-rooted commitment among the people of these nations for building peace elsewhere. That is probably why the European Union did not waver in the past 20 years in providing support and aid to North Korea.

Are there specific regions in North Korea that Concern has focused on?

We work mostly in Kangwon Province and North Hwanghae Province, which we determined to be the areas most in need of assistance based on our internal assessment. Our work there focuses mostly on providing safe drinking water. Diarrhea is one of the top reasons for death for children in North Korea. Together with it, we worked in 42 drought-affected cooperative farms to grow food sustainably, build community resilience, improve irrigation systems and modernize food processing facilities for livelihood security.

But undoubtedly, advocating for aid to the North can be difficult in South Korea, especially in times of high tensions between the two Koreas.

Yes, of course. I think it was easier to say, “Let’s help out North Korea,” around 10 years ago. Changing administrations and their stances toward the North definitely have had an impact on the way people would react to such calls for aid to the North. But I think we are entering a period again when organizations are encouraged to make the call for assistance to the North Korean people.

South Korea’s rapid transformation from an ODA recipient to a provider of ODA is often noted internationally. How do you assess South Korean humanitarian assistance work?

Much of the attention of the people of South Korea is still focused on themselves, I am sorry to say. The government has a role to play here to encourage the South Koreans to step up in helping people of other nations in need. When the United States Agency for International Development or Japan International Cooperation Agency provides aid to another country, they say that it is not the government providing the aid, but the people. In South Korea, the provider of aid is still very much the government, not the people.