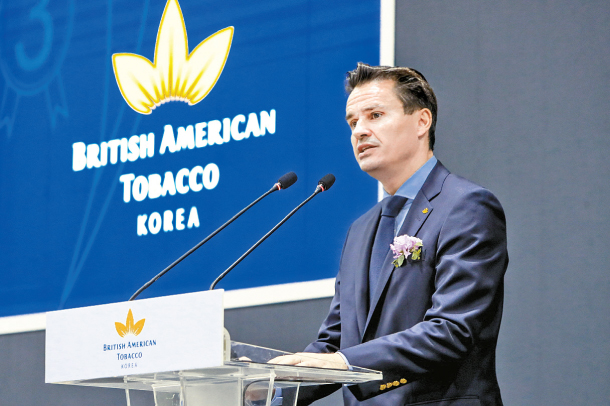 SACHEON, South Gyeongsang - British American Tobacco (BAT) Korea celebrated a milestone for its only factory in Korea: The making of its 300 billionth cigarette.

The Korean unit of the global tobacco company based in London held a congratulatory ceremony Thursday inside its manufacturing facility in Sacheon, South Gyeongsang.

The ceremony was attended by BAT Korea CEO Matthieu Juery, Rep. Yeo Sang-kyoo of the Liberty Korea Party and a number of Sacheon government officials. BAT is internationally known for its high-end cigarette brands like Dunhill and Rothmans. It also makes Lucky Strikes and the Glo heat-not-burn cigarette.

“I am very grateful to all BAT employees and partners who made these remarkable achievements and milestones possible, showing the leadership of BAT in the transformation of its industry,” Juery said, “and at the same time bringing considerable contribution and benefits to the local economy and Korean society.

“BAT Korea is committed to providing Korean consumers with the highest quality of nicotine products, from traditional cigarettes to next generation reduced-risk products,” he said.

The Sacheon factory was started in 2002 and earned the highest rating in manufacturing competitiveness among 55 BAT factories in 48 countries last month.

It has annually produced more than 34.2 billion cigarettes, including heat-not-burn products, and has been responsible for more than $300 million in exports to 15 countries.

The factory has helped the regional economy of Sacheon and South Gyeongsang, and has recently expanded its production volume.

Current employment of BAT Korea is 724 employees at the factory and around 1,000 workers total in Korea.

Around 95 percent of the factory workers are based in South Gyeongsang, said Kang Seung-ho, head of the Sacheon factory. BAT Korea signed a three-year labor agreement through 2021 with its union in April, promising to improve working conditions and increase wage level for new hires.

Yet BAT Korea has been suffering a steady decline in domestic sales in recent years as competition from domestic products intensified. The Korean subsidiary’s domestic sales fell from 413.4 billion won ($357.8 million) in 2016 to 268.2 billion won last year.