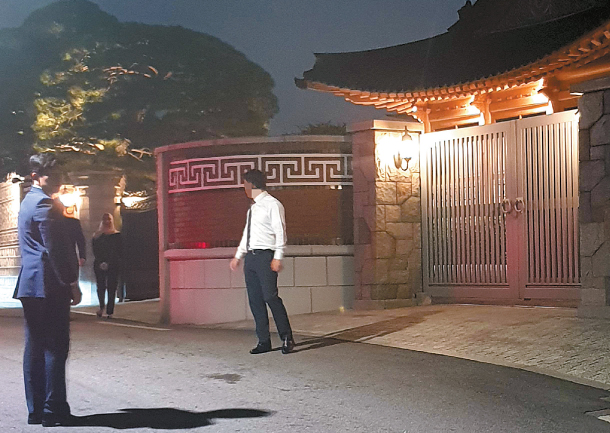 A photo of Seungjiwon in Hannam-dong, central Seoul, where the chaebol heads met Saudi Arabia’s crown prince on Wednesday. [YONHAP]

The meeting came right after the crown prince was President Moon Jae-in’s guest at a banquet at the Blue House.

It is the first time in nine years, since July 2010, that heads of Korea’s top chaebol have gathered in Seungjiwon.

The crown prince arrived at Seungjiwon at around 8:45 p.m. Shortly before he arrived, bodyguards dressed in black suits and police officers cleared the area around the venue. Under strict security protection, even reporters traveling with the crown prince were not allowed inside.

The crown prince and conglomerate heads met for about 15 minutes, their second gathering that day after being briefly introduced during a luncheon at the Blue House. Four out of the five heads had participated in the luncheon - Shin was unable to attend due to a Lotte Holdings shareholder meeting in Tokyo. After the meeting, Chung, Chey, Koo and Shin left the venue at around 9:20 p.m.

Samsung Vice Chairman Lee, who is essentially the owner of Seungjiwon, then met with the crown prince in private.

The two reportedly talked about the so-called NEOM project, a smart city project aggressively pushed by Saudi Arabia, for about 10 minutes. The project focuses on creating smart cities and economic free zones, and is worth some $500 billion.

“There are security problems and I think [they chose] Seungjiwon considering the venue was used as a reception hall for honored guests from abroad in the past,” an industry source said.

The last time conglomerate heads gathered at Seungjiwon was in July 2010 when the leadership of local chaebol lobbying group Federation of Korean Industries (FKI) gathered for a meeting.

Samsung Chairman Lee Kun-hee invited the FKI leadership to appoint the next head of the organization as then-Hyosung Group Chairman Cho Suck-rai had expressed his intention to resign from the role.

At the time, Lee Kun-hee used Seungjiwon, which was originally the home of his father, Lee Byung-chull, as his personal office. Although Lee Kun-hee has been hospitalized since 2014 after suffering a heart attack, the choice of venue suggests that Lee Jae-yong was essentially the host of the event.