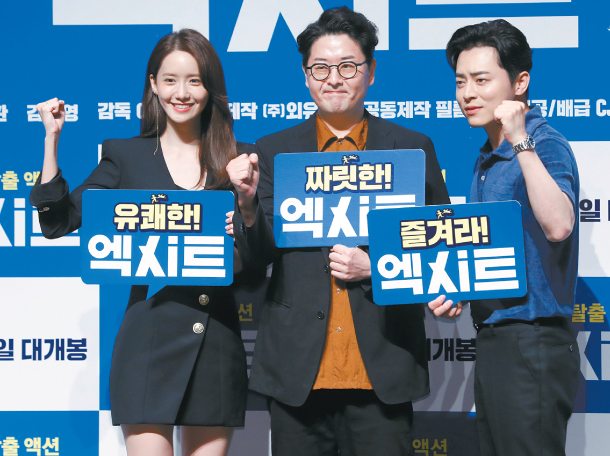 From left, actor Yoona, director Lee Sang-geun and actor Cho Jung-seok pose for photos at a press conference for their film “Exit” held at the CGV Apgujeong branch, southern Seoul, on Thursday. [NEWS1]

Apocalyptic films are familiar to many moviegoers and at this point, they may feel like they’ve seen it all. But the upcoming film “Exit” hopes to attract an audience by veering away from the typical tragic plot lines found in these films. Instead of pure tragedy, the stars of the film, Cho Jung-seok and Yoona, hope that viewers end up bursting out in laughter.

“After I read the script for the film, I thought ‘this is it,’” Cho told the press on Thursday. “I thought [the script was] refreshing, a new type of film that people haven’t seen before. I was immediately hooked on the story.”

Cho also sympathized with his character Yong-nam, who considers himself a failure after continuously getting rejected at job interviews. But when a mysterious toxic gas surrounds the city, he steps up with Eui-joo to lead his family to safety.

“I could see that Yong-nam is a very pure person,” Cho said. “Although he thinks less of himself, I admired him for doing everything it takes - even risking his own life - to make sure that his family is safe.” Cho added that he also empathized with his character’s failures because they reminded him of his own hardships when he had to retake the CSATs, Korea’s university entrance exam.

“Whenever I felt like I was nobody in the world, I would keep telling myself ‘no, you can do this,’ and I think the same goes for Yong-nam who had to step up in the face of crisis although he was unsure about himself.”

“Exit” is Yoona’s first lead role in a feature film. She took the role because she felt that her character, Ui-ju, was similar to herself.

“Ui-ju has more qualities that I want to be like [her], but people who’ve heard about the role told me that she and I were really alike, such as how we are both straight-forward and easy-going,” she said.

Yoona, on the other hand, modestly claimed that her energy on the set was motivated by Cho. “He was always energetic, constantly suggesting new ideas on the set.”

Director Lee Sang-geun agreed with both of his stars. “I wrote the script envisioning Cho playing Yong-nam, and everything else flowed naturally,” he said.

“There were so many action scenes where actors had to run, climb and do wirework because the film focuses on the process of their survival instead of on their predicaments,” he said. “I really appreciated the actors giving their best to realize my story.”

The film will hit theaters on July 31.