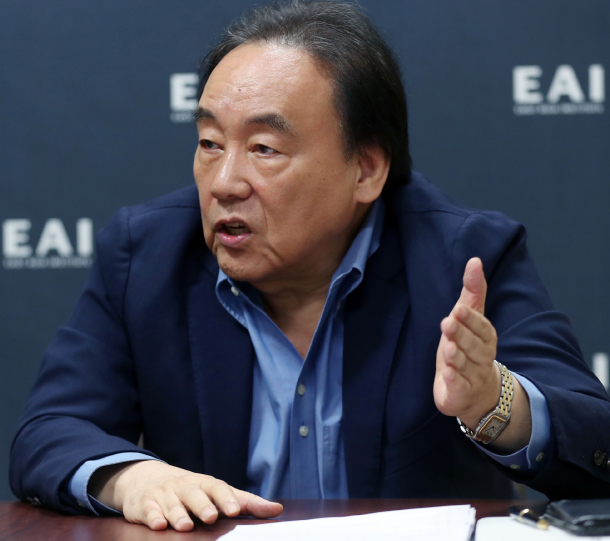 Ha Young-sun, the chairman of the board of trustees at the East Asia Institute, said Korea needs to carefully, but quickly, choose between the United States and China, or else it will face more backlash from China.

The U.S.-China confrontation — recently ignited by the U.S. boycott of Chinese tech company Huawei in the midst of a trade war between the two powers — is leading other nations closely affiliated with the countries to follow through. This is a tough predicament for South Korea, which relies on the United States for security and has a large portion of its economy reliant on China.

Ha has been closely following international politics for nearly 50 years. He studied diplomacy at Seoul National University and holds a Ph.D. in international politics from the University of Washington. He is also a professor emeritus at the department of political science and international relations at Seoul National University. He advised three Korean presidents as a member of the national security advisory group from 2008 to 2016. Currently, Ha serves as a member of the Presidential Committee for Unification Preparation, a committee that prepares for the peaceful unification of the Korean Peninsula.

The JoongAng Sunday recently sat down with Ha in a conference room at the East Asia Institute in Jung District, central Seoul.

Q. People used to call the relationship between the United States and China “cooperative competition,” but recently, cooperation is nowhere to be found. Who do you blame for this recent change?

A. It is difficult to hold just one side responsible. China argues that U.S. President Donald Trump is excessively prioritizing U.S. interests, and the United States is putting the blame on Chinese President Xi Jinping by claiming he is playing by his own rules instead of sharing basic international principles or values with the world. It is hard to claim one side is 100 percent correct or incorrect. In the current situation, I think it is better to see the two countries’ relationship as “confrontational competition.”

Some say the U.S.-China trade war is, in essence, a contest for supremacy that may last for decades. Tell us your view on this claim.
I think this estimation is very myopic. The issue should be seen as a problem that will last for a century, not a generation. Domestically and internationally, I think people’s views on U.S.-China relations are short-sighted in terms of time and space.

The main theory that people in and out of Korea are discussing is a power shift. The people in power and the ones who are rising up the ladder are bound to be attracted to the theory, but I think it is not a persuasive one. One of the more sophisticated global leadership theories is a long-term interval theory. This theory estimates that international political powers are replaced every 100 years.

A century could be cut into four phases by a period of 25 years to 30 years. If one power assumes hegemonic control of the world in the first phase, a second phase comes with the introduction of a contender to that power. Then a “delegitimation” phase comes when another contender challenges the ruling power again by raising a problem.

The transition of phases come when people start to question the [ruling power] for looking after its own interests than the world’s general interests.

Are you saying that we are transitioning to another phase?

Yes. Yet the challenging power is not at a level where it can fight head on with the ruling power, so in this period there will be no military conflicts.

Tell us a little more about the current situation.

U.S.-China competition is situated across four front lines: the economy is the first, which includes the ongoing trade war, while technology is the second, energy is the third and military is the fourth. The economic frontline has already been set up with odds of 19 to 14 between the United States and China, based on the two countries’ gross domestic products (GDP), so one side cannot entirely win 100 percent.

Thus, a compromise is inevitable, in which [both sides] will have to reach a reasonable agreement by giving and taking. The military frontline is a fight with odds of seven to two [with the United States at seven], in regard to national defense budgets. China knows well that facing the United States head on with its military is suicide. There may be military tensions in areas of important interests, as China claims, like the East China Sea, South China Sea, Taiwan or the Korean Peninsula. Yet China will avoid facing the United States head on.
Now, the ones left are energy and technology. The United States has become an exporter of energy thanks to shale gas. China, which is an importer of energy, relies on the Middle East and Russia. Yet Russia is a difficult opponent to deal with, and in the Middle East, the United States is pressuring China with Iran.

China is in a crisis, as it cannot rely on the United States for energy. Trade wars will undoubtedly lead to a technological supremacy battle, like we can see in the Chinese information technology company Huawei’s case. China has rapidly caught up to the United States in terms of commercializing technologies that have already been developed, but it lags behind in inventing new technologies.

These four frontlines are matters of life and death for Korea. Each frontline’s progress in the U.S.-China confrontation should be thoroughly monitored, but the government and academic circles are doing an insufficient job.

Trump has a set term for his presidency, but Xi has no such thing. Isn’t time on China’s side?

It is a difficult question. The problem is whether the 21st century will remain that of the United States or whether China will take the lead.

Is it possible for China to take the lead?

Until the mid-21st century, the United States will inevitably lead the world, but after that, it is up to China. There are two key points.
First is the political system. It is about whether the current Chinese political system is appropriate in a time like the 21st century. The communist political system was very effective in putting China in second place, but it will not be enough for first place. The country will have to fight and win a battle of imagination and creativity, but there is the question whether that is possible in the current political system.
Second is the standard of civilization. This is whether people will see China as the standard of civilization instead of the United States within 20 years to 30 years. The creation of a powerful socialist civilization by 2050, as proposed by Xi, is not enough to persuade people.

The Moon Jae-in government is being criticized for only being focused on mending North-South relations, making it miss out on the battle between the United States and China. Tell us your views.

The North-South confrontation, which comes from a tragedy of modern Korean history, remains an important problem for us to this day. Yet when seen in terms of urgency and importance, the U.S.-China problem is the priority. We have no choice but to solve the North-South problem within U.S.-Chinese relations. China stands by its “One Belt, One Road” initiative, and the United States focuses on its Atlantic-Pacific ocean strategy. North and South Korea, which are situated between these two countries, cannot move global trends [according to their wishes]. If the Koreas go forward by sticking to themselves, it might lead to the [two powers] turning their backs on [the Korean Peninsula].

Korea is being forced to choose between the United States and China following the Huawei boycott by the United States and several other countries. If Huawei doesn’t lead to a second retaliation by China, like when the U.S.-led Terminal High Altitude Area Defense (Thaad) antimissile system was installed in Korea, what should the Korean government do?

Huawei’s case is basically the same as the Thaad case. [The government] will need to carefully consider the country’s interests and must be able to justify its choice by following its principles and criteria. Cooperating with countries in similar positions is also important. The problem shouldn’t be left for companies to solve alone.

What stance should Korea take?

Korea mustn’t vacillate on its actions like it did when the United States installed Thaad in Korea. Korea should listen to both sides.