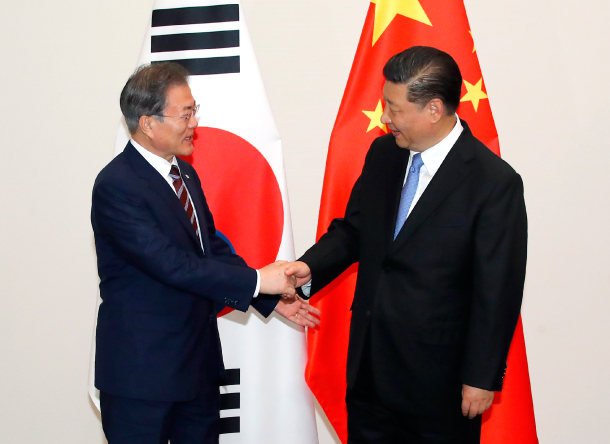 Moon’s summit with Xi took place shortly after he arrived here to attend a Group of 20 (G-20) forum scheduled for today and tomorrow. Accompanied by their top national security and economic aides, the two leaders discussed bilateral economic exchanges and the latest development in the two Koreas, including Xi’s trip to Pyongyang last week to meet North Korean leader Kim Jong-un.

According to Blue House spokeswoman Ko Min-jung, Xi described his summit with Kim to Moon, including his intention to improve inter-Korean relations. Xi visited Pyongyang on June 20 and 21.

“Kim’s will for denuclearization remains unchanged,” Xi was quoted as telling Moon. “Kim is also working to develop his economy and improve the livelihoods of the people based on his new strategy, and he hopes for a better outside environment.

“Kim also wants to resolve the current crisis through dialogue,” Xi was quoted as telling Moon. “Kim hopes to find a reasonable resolution as soon as possible by keeping his patience.

“Kim has the intention to seek reconciliation and cooperation with the South,” Xi continued, “and the trend of dialogue on the Korean Peninsula will not change.”

During Xi’s state visit to North Korea, Kim had told the Chinese leader that he is waiting for a desired response in stalled nuclear negotiations with the United States, while Xi said China is willing to play a constructive role in the denuclearization of the Korean Peninsula.

The trip fueled speculation that China has decided to become an arbiter, a role Moon has long tried to pursue.

According to Ko, Moon told Xi that the North-China summit and exchanges of letters between Kim and U.S. President Donald Trump have heightened the momentum for the North-U.S. dialogues. “I hope the North-U.S. talks to resume quickly,” Moon was quoted as saying.

A senior presidential aide said Xi told Moon that he supports a third summit between Kim and Trump. “Xi said he hopes Pyongyang and Washington show flexibility so that dialogues will take place,” the official said.

In his opening remarks of the 40-minute summit, Moon thanked Xi for efforts to end the impasse in the denuclearization talks between the United States and North Korea.

“Last week, Xi visited the North for the first time since he took office and had a summit with Kim, playing a constructive role and contributing to the complete denuclearization and permanent peace of the Korean Peninsula,” Moon said. “It is very meaningful that I can listen to the outcome of the visit directly from you. I hope to have an in-depth discussion with Xi to deepen bilateral friendship and cooperation and achieve peace and prosperity on the peninsula and in the region.”

Xi stressed his intention to cooperate with Moon on a wide range of areas. “We can accomplish many things when the two countries work together,” Xi told Moon in his opening remarks.

“China will tirelessly work to improve bilateral relations with Korea,” Xi said. “We will contribute to maintaining the peace and security of the Korean Peninsula and the region.”

According to the Blue House, Moon and Xi agreed that the Chinese president should visit Korea at an early date to elevate bilateral relations to the next level. Moon visited China in 2017, the first year of his presidency, but Xi has yet to reciprocate.

A senior presidential aide said after the summit that the two sides will discuss Xi’s plan to visit through diplomatic channels, adding that Moon has asked for the Chinese leader to come soon.

Other sensitive issues were also discussed during their summit. According to the source, Moon described Korea’s predicament over the U.S.-China trade war. “Moon said the United States and China are Korea’s two largest trade partners,” the source said. “He said Korea doesn’t want to face a situation in which it will have to choose one of them and Korea hopes for a smooth settlement of the dispute.”

According to the presidential source, Xi also raised the issue of Korea’s decision in 2017 to allow the United States to deploy the Terminal High Altitude Area Defense (Thaad) antimissile system. Reminding Xi that the system was placed due to the North’s nuclear and missile threats, Moon said denuclearization must be realized to resolve that particular issue.

During the summit, Moon noted that economic ties between the two countries are stronger than ever and expressed hope for further cooperation. Korea’s tourism and cultural content industry remain affected by China’s economic retaliation for its 2017 decision to allow to deploy the U.S. advanced antimissile system.

“Last year, bilateral trade and investments were the highest ever,” Moon said. “I hope to see further expansion of exchanges in other areas, such as people-to-people exchanges and cultural industry, where we can actually feel the improvements.”

According to the Blue House, the two leaders also discussed environmental issues, such as air pollution.

Other officials who accompanied Xi included Liu He, a Chinese economist and politician currently serving as vice premier of the State Council; Yang Jiechi, a diplomat and a member of the Central Politburo; Foreign Minister Wang Yi; He Lifeng, minister of the National Development and Reform Commission; Finance Minister Liu Kun and Commerce Minister Zhong Shan.

“The summit allowed the two leaders to strengthen their trust and friendship,” the Blue House said. “It also reaffirmed the two countries’ close communication and willingness to cooperate for denuclearization and permanent peace of the Korean Peninsula. It was also an opportunity to seek tangible resolutions to expand cooperation and exchanges.”

Following the summit, Moon hosted a dinner for about 400 Koreans living in Japan.

In addition to the summit with Xi, Moon is scheduled to have a series of bilateral meetings with other leaders, including Russian President Vladimir Putin, while he is attending the G-20 conference.

It remains doubtful that Moon will have a summit with Japanese Prime Minister Shinzo Abe. A senior presidential official said Tuesday that Japan had not made an offer for a bilateral summit, but Korea is ready to accept a spontaneous proposal during the G-20 summit.

After Moon challenged a bilateral agreement to settle the issue of Japan’s wartime sexual enslavement of Korean women, signed in 2015 by his predecessor, Korea-Japan relations have rapidly deteriorated.

In a joint interview with international news agencies released Wednesday, Moon said that he is open to solutions. “For my part, the door is always open for dialogue between our two leaders in order to advance Korea-Japan relations, including over the issue mentioned above,” Moon said. “Whether we can take advantage of the opportunity presented by the G-20 summit depends on Japan.”

In his speech at the dinner with Korean residents on Thursday, Moon expressed frustration about the diplomatic rift, saying, “It takes just one hour and half to arrive here, but it took a long time for me to finally meet with you.”

He also said the government will work to build friendly, cooperative ties with Japan that will not be shaken by hardships.

Today, Moon will attend an official welcome ceremony for the opening of the G-20 summit and be in a group photo. Moon will give a speech at the first session and present his administration’s policies aimed at creating an innovative, inclusive country.

On the sidelines of the first session, Moon will have bilateral meetings with Indian Prime Minister Narendra Modi and Indonesian President Joko Widodo.

After attending the second session, Moon will attend the G-20 official dinner.

On the final day of the G-20 summit on Saturday, Moon will make a speech at the third session and have a summit with Canadian Prime Minister Justin Trudeau.