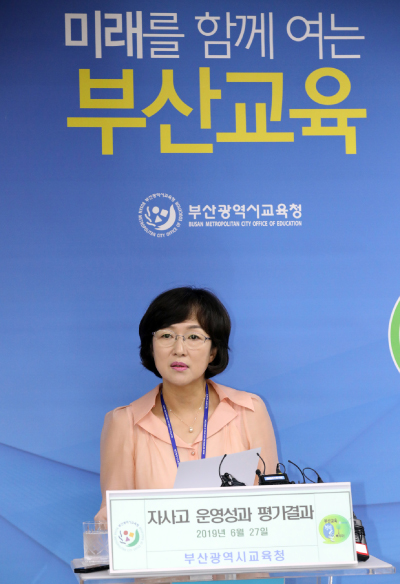 Chun Jeong-suk, chief of the education support section of the Busan Metropolitan City Office of Education, announces on Thursday that the office will revoke the autonomous status of Haeundae High School. [NEWS1]

The Busan Metropolitan City Office of Education announced on Thursday that it plans to revoke the autonomous status of Haeundae High School (HHS), the only autonomous private high school in the southern port city.

“We will go ahead with the next step to revoke Haeundae High School’s designation as an autonomous private high school,” said an employee of the Busan education office. “The school scored less than the passing score of 70 [in its assessment by the local education office].”

The school received a score of 54.5 on the assessment.

Autonomous private high schools maintain financial independence from the government and in return are granted more freedom in picking students, creating their curriculum and charging tuition.

HHS faced a stricter assessment compared to last year, as this year’s assessment has an additional two indexes that evaluate the amount of effort the school puts into improving classes and whether the school is fair in admitting transfer students. Higher weight was given to the categories of school management, curriculum and the assessment by local education offices. On the other hand, the importance of parent and student opinions on the assessment was reduced to prevent biased opinions from changing a school’s results. The highest score that schools can get from students and parents is eight points, a drop from the 12-point maximum score in 2018.

The decision is part of a larger movement by the progressive Moon Jae-in administration to scrap autonomous private high schools across the nation. It hopes to achieve what it describes as equality for all students in education and competition.

Education Minister Yoo Eun-hae said Monday during a press conference that she plans on eliminating Korea’s autonomous private high schools on the grounds that they create an excessively competitive educational environment.

“Autonomous private high schools were created to give students a chance [for] diverse and creative education,” said Yoo. “The competition to get into universities has intensified [to the point where it] starts with children in elementary schools, which resulted in distorting the educational system.”