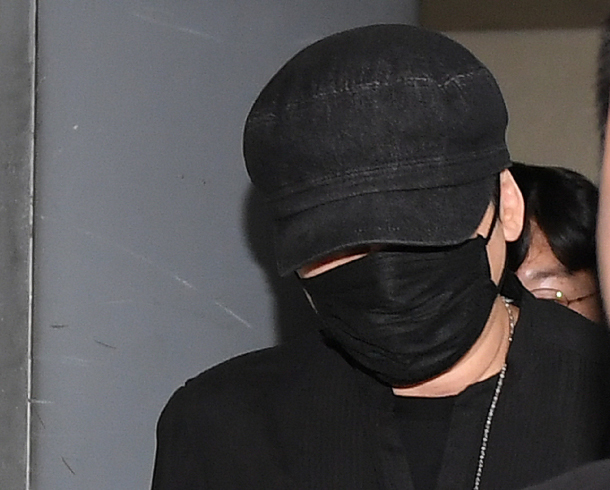 Yang Hyun-suk, co-founder and former CEO of the K-pop empire YG Entertainment, leaves the Seoul Metropolitan Police Agency in Jongno District, central Seoul on Thursday morning after a nine-hour questioning about allegations that he arranged prostitutes for foreign investors. [NEWS1]

Police said that Yang adamantly denied the accusation. The 49-year-old arrived at the Seoul Metropolitan Police Agency in Jongno District, central Seoul, at around 4 p.m. on Wednesday and left at 12:45 a.m. Thursday. Yang was summoned as a witness, not a suspect, apparently due to a lack of evidence.

It was the first time Yang was summoned by police in the case after a local broadcaster aired an interview with an unidentified person in late May, who claimed Yang hired prostitutes for two businessmen visiting from Southeast Asia in 2014. The source told MBC that Yang had dinner with the two businessmen one night in July 2014 at a high-end restaurant in Seoul that was entirely emptied for them, and that 25 other women were there as well. After dinner, according to the report, the crew left for a nearby club in Gangnam District, southern Seoul, for another round of drinks, which turned out to be a sex party. MBC said a “famous singer” for YG was present as well, without revealing any names.

That singer later turned out to be Psy, best known for his global smash hit “Gangnam Style.” After the MBC show was aired, Psy admitted via Instagram to attending the dinner and drinking party five years ago with Yang, but said he and Yang left “early."

After eight years with YG Entertainment, Psy, whose real name is Park Jae-sang, left the label last year to start his own company, P Nation. Yang resigned from YG Entertainment on June 14 following a different local media report that claimed he used police connections to cover up for his stars’ drug scandals.

A Seoul police officer said on the condition of anonymity Thursday that the investigation of Yang was failing to pick up any speed at this point because it was “physically difficult” to collect evidence on a case that occurred five years ago, and was made harder because the people involved weren’t opening up.

An MBC reporter told a YTN radio show on Wednesday afternoon that Yang texted her after the report was aired last month, saying he was “aware” that the police will “soon” wrap up their investigation after concluding not to press any charges against him.

In a follow-up report last Monday, MBC reported that a YG employee “planned” a week-long European trip for about 10 Korean prostitutes in October 2014 to meet one of the two businessmen and shop in luxurious stores in southern France and Italy. The trip was said to have been entirely funded by the businessman. According to sources MBC interviewed, the businessman contacted YG asking for prostitutes, and YG asked a local brothel manager to provide them. That manager was the same person who provided prostitutes for the earlier July 2014 sex party, according to MBC.