At Ajou, students have lessons for administration

At Ajou, students have lessons for administration 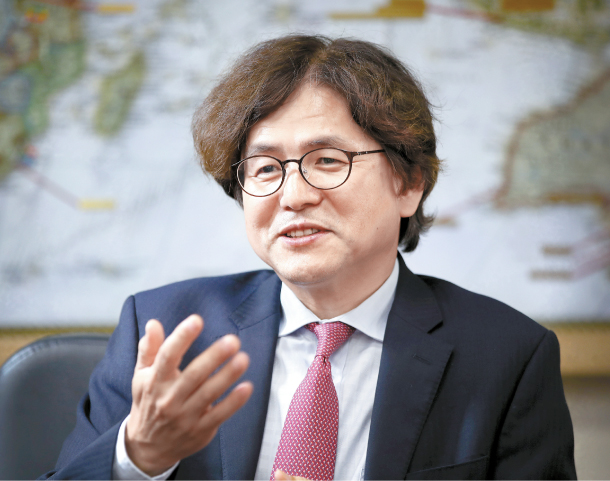 Park Hyung-ju, president of Ajou University, talks about how the school supports students who contribute to society through project-based education during an interview with the JoongAng Ilbo at his office in Suwon, Gyeonggi, last week. [OH JONG-TAEK]

Park Hyung-ju, president of Ajou University in Suwon, Gyeonggi, thinks that project-based education and hands-on experience are the keys to preparing students for the future.

Ajou has been supporting students who work on independent projects to explore and experience the vast amount of knowledge that schools alone cannot provide in classrooms.

This project-based education also contributes to communities, as Ajou works hard to make social policies out of the groundbreaking ideas that students come up with to solve important problems.

“In order to overcome the crisis that universities are going through, students must be satisfied first,” said Park. “Communication is needed the most.”

Park is true to his word, as he visits students and faculty to talk to them and get ideas for improving the school. Each week, four or five students share their problems with Park and he helps them by making policy changes.

After hearing that students want to take classes from different departments, Park is planning to create shared classes where students from other majors can study without worrying about their grades, as these students will be assessed separately. Park waits at a cafe on Ajou’s campus every Monday to talk with students.

Park received his bachelor’s degree in physics at Seoul National University. He then received his doctoral degree in mathematics at the University of California, Berkeley. He started working as a professor at Oakland University in Michigan in 1995, and later went to KAIST, Korea’s top science and engineering university in Daejeon, as a computational science professor at the school’s institute for advanced study. In 2015, Park came to Ajou for the first time as a professor in the mathematics department. He became the university’s president in February.

The JoongAng Ilbo sat down with Park in his office last week to talk about how Ajou supports students who contribute to society through the school’s project-based education.

Q. Is there a reason why you focus on communication?

A. It is to make essential policies for the students, who are the consumers of education. Korea is not the only country going through a crisis, as this phenomenon can be seen around the world. Last year, only 30 percent of universities in the United States were able to meet their quota of freshmen. With the introduction of platforms like massive open online courses (MOOC), there are many resources that can take schools’ places. We are living in an era where we can attend lectures from famous professors from Harvard University and Stanford University on the internet. We need to give students a reason to attend universities, in a traditional sense. If not, universities will be shut down far faster than they are right now.

How are students’ opinions reflected in school policies?

A student majoring in culture and contents complained that there were very few subjects offered by his department, so he asked me to allow him to take classes from the digital media department. Yet when I spoke with professors, they told me that if students from the culture and contents department take lectures from the digital media department, it would be hard for them to get a good grade. That is why I am trying to improve the policy by allowing students to attend classes from other departments and assess them separately.

What values do universities of the future emphasize?

Since visiting the schools leading the innovative education field, I have found that interactive and project-based education is the answer. A leading university that implemented interactive education is Nanyang Technological University in Singapore, which has recently been receiving attention for being a research-based school.

Here, it is hard to find a classroom with blackboards and square tables in a traditional sense. Most classrooms have round tables and the walls are covered with whiteboards where students exchange their thoughts freely with one another. Students can learn debate, consulting and communication skills that MOOCs don’t offer.

What do you mean by project-based education?

In the past, universities focused on fostering students who meet the standards that companies seek. Students who realized the limitations of what they could learn in a classroom would go overseas and experience various things.

They were the ones who received attention. In the future, students will need experience in solving social issues by themselves. A good example is the social issue-solving classes at Stanford University and Arizona State University. Students who take the classes attempt to come up with solutions to problems the government faces, like poverty or the sewage system.

Ajou is known to have a similar class.

We have been carrying out a project-based education program since 2016, where students create their own projects and carry them out for a semester. Students can get three to 18 credits through this program. In the seven semesters since the program started, 717 students participated. Students took up projects from various fields — like planning, producing or distributing TV shows — using information technology to develop a model for houses that produce energy so they can run self-sufficiently and to create a drone that can sense danger. The future needs people who do things instead of seeing them. An experience of doing something just once is more important than looking at something for a long time.

Does this mean that students are going to be involved with social issues?

We try to help groundbreaking ideas [that students come up with] become social policies. The Ideathon, a combination of idea and marathon, carried out in the first semester of 2019, is a good example. Around 150 college students from across the country participated in an idea competition to help the disabled in their daily lives. The city of Suwon plans on creating actual policies out of ideas that received a high score, which include braille maps, an emergency rescue reporting app for people with hearing and speech disorders, and an affordable ramp that can be folded.

Why are these programs important?

In the fourth industrial revolution, many jobs will disappear because of artificial intelligence [AI]. A research team at the University of Oxford expects 46 percent of the jobs today will disappear by 2033. It is highly possible that a person will experience losing their job and having to do something else that they will never have done before. This is why universities need to foster people who can easily learn things instead of having a lot of knowledge. Students can learn to study new things by solving problems through projects and studying books and theses.

You emphasized that the future is an era of connection, not fusion.

Connection is a concept where elements maintain their identity and cooperate with one another. If fusion is A+B=C, connection is A+B=AB. One can make new values through the process of connecting knowledge. This is not limited to education, but can also be applied to research as well. The autonomous driving center at Ajou is a form of connected research. It is a place where experts from various fields — like information and communications, data science, medicine and law — cooperate with one another.