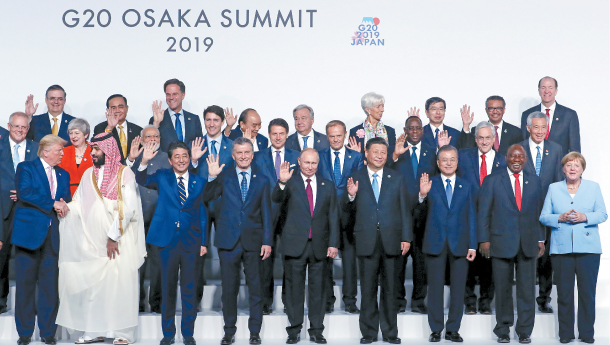 OSAKA, JAPAN - President Moon Jae-in had an eight-second handshake with Japanese Prime Minister Shinzo Abe, but the Japanese leader made clear his intention to snub his Korean counterpart amid diplomatic rows over their countries’ bitter history.

Yet Moon and Abe had no summit, not even a brief pull-aside meeting on the sidelines of a main conference, as of press time.

The only encounter between the two leaders took place when they attended the official welcome ceremony at the International Exhibition Center of Osaka in the morning. Ahead of a group photo session, the participating leaders took turn taking photos with Abe, the host.

Starting with Saudi Arabia’s Crown Prince Mohammed Bin Salman, the participating leaders entered the venue and were greeted by Abe one after another. Moon was sixth in line for a photo.

Moon walked toward Abe and gave his greeting first. Both Moon and Abe wore smiles as they shook hands and posed for photos. The entire encounter took about 20 seconds, including an eight-second handshake. Abe, then, showed Moon the way out with a hand gesture.

The encounter was uneventful and Abe’s reaction to Moon was subdued. He gave a passionate welcome to French President Emmanuel Macron, who was behind Moon in the queue. Abe hugged the French leader and patted his back.

The Blue House on Friday released some photos of the president in the waiting room before the G-20 Summit began. Photos showed Moon talking with Xi and other leaders, but not Abe.

Since Moon took office in May 2017, he has had five summits with Abe. The last was on the sidelines of a United Nations (UN) General Assembly in New York last September.

Korea and Japan share a bitter history, including Japan’s 1910-45 colonial rule of Korea. Enslavement of Korean women in wartime brothels and conscription of forced laborers have been thorny issues.

In a joint interview with international news agencies released Wednesday, Moon said that he is open to solutions. “For my part, the door is always open for dialogue between our two leaders in order to advance Korea-Japan relations,” Moon said. “Whether we can take advantage of the opportunity presented by the G-20 summit depends on Japan.”

Moon met Abe again as he entered the official G-20 dinner on Friday, but they did not have any special talk.

Abe is scheduled to have summits with at least 19 foreign leaders and heads of international organizations.

Shortly after Moon’s arrival here on Thursday, speculation quickly spread that Japan was intentionally treating him poorly, as Moon and his wife exited the presidential airplane using a roofless stairway despite pouring rain. Moon held an umbrella for himself and his wife.

The Blue House quickly denied shabby treatment on the part of Japan. “It was Korea’s decision to use a roofless stairway at the airport to better accommodate photojournalists,” it said. “It was also to show respect to the people who came to the airport to welcome the president.”

While some leaders, including Xi, used stairways covered with roofs, others, including Trump, used roofless stairways. Trump also held an umbrella for himself.

It was evident that Korea was increasingly left out of regional partnerships, particularly the traditional trilateral cooperation with Japan and the United States to counter North Korea’s security threats, while the North is highlighting its decades-long alliances with China and Russia.

Abe and Trump sat down for a summit ahead of the G-20 forum on Friday. That 35-minute summit was their third in three months - they met in Washington in April and Tokyo in May.

Abe and Trump reaffirmed that they are in complete agreement over the denuclearization of North Korea, including the importance of complete implementation of UN Security Council resolutions, the Japanese government said in a briefing. “They reconfirmed that Japan and the United States will continue to work together,” it said.

“The two leaders talked about the updated information on North Korea affairs including the recent North-China summit,” said Deputy Chief Cabinet Secretary Yasutoshi Nishimura. “They spent quite a lot of time to meticulously coordinate their positions.”

A trilateral meeting among Moon, Abe and Trump did not take place at the G-20 summit.

The last time such a trilateral summit took place was in September 2017.

Instead of promoting Korea-Japan-U.S. cooperation to counter the North, a new type of a trilateral partnership among Japan, the United States and India was touted.

Leaders of the three countries held a trilateral summit on Friday and discussed the “Free and Open Indo-Pacific” strategy promoted by Abe and Trump.

It was the second time that the leaders of the three countries sat down for a summit since their first meeting at the G-20 forum last year.

“The partnership of the three countries is the cornerstone of regional security and prosperity,” Abe said in his opening remarks for the trilateral summit.

Indian Prime Minister Narendra Modi said he wants to realize peace and stability in the Indo-Pacific region. While Japan and India each have trade issues with the United States, it was apparent that they want to bolster their influence on security issues in the region involving China.

Ever since the “Indo-Pacific” strategy was introduced in 2017 - an apparent campaign to counter China’s One Road, One Belt policy - Korea has shied away from it, fearing possible retaliation from Beijing.

Trump, who will meet with Moon in Seoul this weekend, may pressure Korea to participate in the Indo-Pacific strategy.

During a bilateral summit with Modi earlier Friday morning, Moon said India is a key to his “New Southern Policy” to expand Korea’s cooperative ties.

Modi replied that Korea and India are maintaining a strong friendship and his so-called brotherhood relationship with Moon also remains close.

Moon also had a bilateral summit with Indonesian President Joko Widodo. While Moon expressed hopes to develop the bilateral partnership, the Indonesian leader said his top agenda for the meeting was about the “Indo-Pacific” strategy.

Moon also had a bilateral summit with Macron on Friday.

After an official dinner hosted by Abe, Moon was scheduled to meet with Russian President Vladimir Putin late Friday night.

During the first session of the G-20 summit, Moon stressed that member countries must cooperate to counter the latest trade friction and protectionism, expand free trade and reform the World Trade Organization.

Moon also had a bilateral summit with Macron on Friday and requested France’s continuous support for his Korean Peninsula peace policy and a third North-U.S. summit to achieve denuclearization and peace of the peninsula.

Korea’s success in the first commercialization of 5G technology and the recent increase in its gross national income per capita to over $30,000 were shared with the participating leaders.