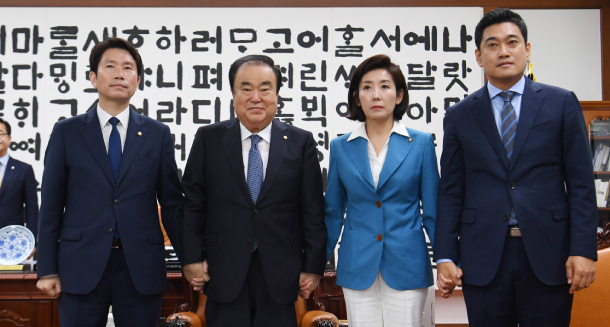 Friday’s deal was the second to be reached between the floor leaders of the ruling Democratic Party (DP), main opposition Liberty Korea Party (LKP) and minor opposition Bareunmirae Party this week, after the LKP on Monday turned back on a compromise just hours after it had been reached.

The agreement extends the mandates for the National Assembly’s special committees on political and judicial reform from this Sunday to Aug. 31, giving the two bodies additional time to review several bills on electoral reform and changes to the powers of investigative agencies. Fast-tracking of bills on those issues in April prompted confrontation between rival parties that led to physical scuffles at the legislature and paralysis of lawmaking.

The LKP staged a boycott of all legislative activities since then. In an abrupt turn of events last Monday, its lawmakers even rejected their floor leader Rep. Na Kyung-won’s decision to ink an agreement with the other parties on Monday to normalize operations of the legislature on the basis that the deal did not fully meet their demands. Those include a renegotiation of the fast-tracked bills, an apology from the DP for pushing them through and a parliamentary hearing on the economy.

Yet with the two committees’ mandates quickly nearing expiration, several DP and allied lawmakers threatened to push through the contentious bills for a general vote on the floor if the LKP did not assent to extending the committees’ mandates. If such an attempt had been made, it would have inevitably provoked LKP lawmakers to try to physically obstruct other lawmakers from passing the bills into law in a repeat of April’s violent showdowns at the legislature.

In a hard-fought compromise to avoid such a scene, the DP agreed to hand over the chair of one of two committees in question to the LKP, while agreeing to add another seat for an LKP lawmaker on the political reform committee. The latter decision, which increases the LKP’s share on the committee from six to seven votes compared to the DP’s eight, is expected to augment its voice on how to reshape Korea’s electoral system.

Another victory for the main opposition party, which strongly opposes reducing the number of single-member districts in the country’s legislature, is the removal of Rep. Sim Sang-jeung of the leftist Justice Party as head of the judicial reform committee. Sim had been the leading voice in the National Assembly in pushing an overhaul of the current electoral system to one that provides a more level playing field for smaller parties like hers.

But there is still a long way to go until the parties reach agreement on the future of the disputed bills. The relative parity of the DP and LKP’s presence on both committees is likely to turn these bodies into venues of continued partisan wrangling, while both parties have yet to resolve the issue of the legal complaints they filed against each other over the violence that took place in April.