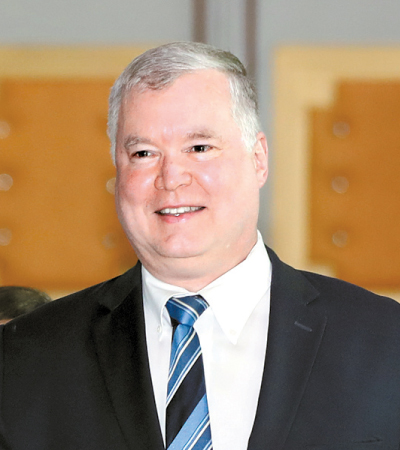 Before kicking off talks at the Foreign Ministry’s headquarters in central Seoul Friday morning, South Korea’s Special Representative for Korean Peninsula Peace and Security Affairs Lee Do-hoon welcomed Biegun and said they would consult on “ways and means to translate [recent diplomatic interactions on the Korean Peninsula] into substantive progress on denuclearization.”

A Foreign Ministry statement said the two envoys reaffirmed their countries’ commitment to the complete denuclearization of the Korean Peninsula and the willingness to pursue “constructive dialogue” with Pyongyang to fulfill the agreement signed by Trump and North Korean leader Kim Jong-un in Singapore in June 2018.

In the afternoon, Biegun met with Unification Minister Kim Yeon-chul to talk about Seoul’s latest plan to supply food to the North through international organizations.

On Friday, the Inter-Korean Cooperation and Exchange Council, an inter-ministerial body of officials and experts, approved an allocation of government funds to supply 50,000 tons of domestically grown rice as humanitarian aid to the North, a decision announced last week.

Trump’s visit to Seoul and summit with South Korean President Moon Jae-in are expected to build on calls for renewed dialogue that were prompted by an exchange of letters between the White House and Kim Jong-un earlier this month.

The U.S. president said before leaving Washington for a Group of 20 summit in Osaka, Japan, that while he would not be meeting Kim in Korea this week, as speculated by many in the media, he would be speaking to the North’s leader “in a different form.”

Biegun, analysts say, may be carrying a new proposal from the U.S. administration designed to bring the North back to the negotiating table. Trump may have some kind of related announcement during his summit with Moon, or through a speech from the demilitarized zone (DMZ) if Trump decides to visit the area.

At a diplomatic forum in Washington last week, Biegun alluded to the possibility of a new negotiation strategy when he brought up a “need for a flexible approach.”

Since the second U.S.-North Korea summit in Hanoi, Vietnam, last February, which collapsed due to the refusal of the United States to grant sanctions relief in return for the dismantlement of the Yongbyon nuclear complex, Pyongyang demanded that Washington present “a new calculus” in their talks, setting an ultimatum for the end of the year.

Contrary to media speculation that Biegun might hold talks with North Korean officials in the DMZ, a South Korean Foreign Ministry official said such a meeting was unlikely during Biegun’s four-day stay in Seoul. Trump, however, could still visit the DMZ’s border village of Panmunjom.

South Korea issued a high alert to police throughout the capital from as well as northern Gyeonggi from Friday, ahead of Trump’s visit.

Various civic organizations were expected to hold rallies in downtown Seoul welcoming and protesting Trump’s vist over the weekend.

In recent days, the North has issued a string of public messages slamming South Korea for trying to mediate between Washington and Pyongyang.

In a commentary released by one of its state-run outlets, Arirang Meari, Pyongyang balked at Moon’s recent call to restart dialogue during his visit to northern Europe, without referring to the South Korean president by name.

“It is laughable how South Korean authorities, despite having put inter-Korean relations at a stalemate by ignoring joint declarations and walking on eggshells around the U.S., have the gall to put out self-praise and take credit [for diplomatic achievements],” the editorial read. “Now is not the time for unwarranted sophistry but time for practical action to break the stalemate.”

On Thursday, the U.S. bureau chief of North Korea’s Foreign Ministry, Kwon Jong-gun, released a statement telling South Korea not to interfere in its diplomacy with the United States, dealing a blow to Moon’s pursuit of a mediating role in the process.

“If we need to contact the United States we will use our communication channels that have long been active, and if we negotiate with the United States, we will sit down directly, face-to-face [with U.S. officials],” Kwon said. “There is no way we will go through South Korean authorities.”