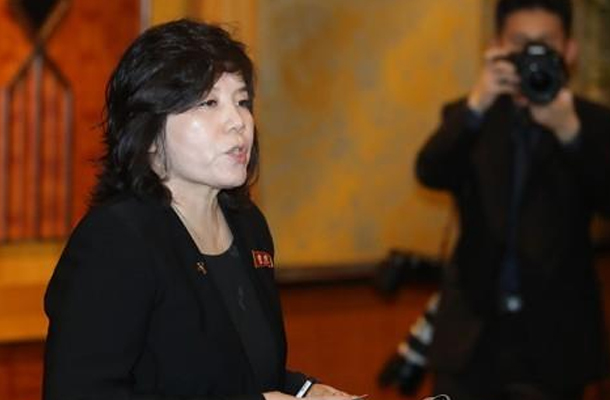 North Korea said Saturday that a proposal by U.S President Donald Trump to meet its leader Kim Jong-un at the inter-Korean border is a "very interesting suggestion."

"We see it as a very interesting suggestion, but we have not received an official proposal in this regard," North Korea's First Vice Foreign Minister Choe Son-hui said in a statement carried by the North's official Korean Central News Agency.

"I am of the view that if the DPRK-U.S. summit meetings take place on the division line, as is intended by President Trump, it would serve as another meaningful occasion in further deepening the personal relations between the two leaders and advancing the bilateral relations."

DPRK stands for the North's official name, the Democratic People's Republic of Korea.4

The statement came hours after Trump expressed hope for a meeting with Kim at the inter-Korean border as he is to visit South Korea over the weekend from his trip to Japan for a Group of 20 summit.

"While there, if Chairman Kim of North Korea sees this, I would meet him at the Border/DMZ just to shake his hand and say Hello(?)!" Trump tweeted, referring to the North's leader.

There had been speculation that a Trump-Kim meeting could take place at the Demilitarized Zone, the border between the two Koreas, but Trump denied before leaving Washington that he planned to meet Kim.

Trump and Kim held their latest and second summit in February in Hanoi, which ended without a deal as they failed to find common ground over Pyongyang's denuclearization steps and Washington's corresponding measures, such as sanctions relief. Their denuclearization talks have since been stalled ever since.

In April, North Korean leader Kim said that he will wait for the U.S. to make a "courageous" decision until the end of this year, apparently urging Washington to ease what it sees as unilateral denuclearization demands.

On Thursday, the North urged Washington to come up with a "correct method of calculation" if it truly wants to resume denuclearization negotiations, warning that time is not sufficient to produce results before its earlier imposed end-of-the-year deadline.

The mood has changed for the better in recent weeks as Trump and Kim exchanged personal letters, raising the prospects that Washington and Pyongyang could resume their stalled talks following the breakdown of their February summit.

As Pyongyang responded positively to Trump's offer for a border meeting, expectations are growing that a three-way summit also involving South Korean President Moon Jae-in could take place over this weekend.

Moon has repeatedly expressed his desire to meet with Kim again to advance stagnant inter-Korean relations and mediate the resumption of the stalled nuclear talks. Pyongyang has yet to respond to Moon's offer for dialogue.