Named and shamed: Parents not receiving child support are resorting to extremes to get their due

Named and shamed: Parents not receiving child support are resorting to extremes to get their due 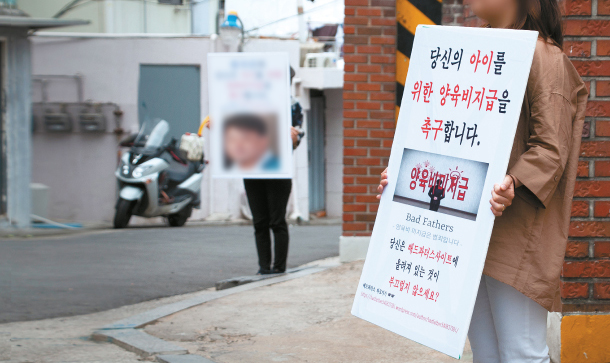 Kim Jun-hee, 42, divorced her husband 16 years ago due to domestic violence. Her ex-husband paid her his court-ordered child support three times, then asked to see his children. When they met, he demanded that the children take a DNA test, saying that he could not trust whether they were actually his children. Since that meeting, he has not given any money to Kim or their children.

In early June, Kim joined Park Ji-young (alias) as she staged a protest against her ex-husband in front of his residence in central Seoul. Park posted a request to the members of the online community “For Childcare: Child Support Solution Association,” asking for support - five members joined, including Kim. According to Park, her ex-husband has never paid his mandatory child support or met with his children since their divorce 11 years ago.

“I have tried literally everything that I can, but there’s nothing I can do but stand outside his house like this,” said Park. “This whole building is his, but the court can’t force him to pay me because he turned over the legal possession to his parents. So legally, he’s broke, even though he flies off every weekend for golf trips.”


According to Kim and Park, there is no realistic way to force ex-spouses to pay child support if they evade their duties. From the moment they decide not to pay and ignore the court’s decision, there are many ways for them to escape but no way of forcing them to carry out their legal duties.

For instance, if the noncustodial parent transfers their legal possessions and assets to someone else’s name, then the court cannot order them to pay because they have no money to their name. The Ministry of Gender Equality and Family can request the Commissioner of the National Tax Service or the head of the local government to “garnish the estimated amount from [their] national and local tax refund” - yet, if the official amount of money they earn is zero or close to zero, then there’s nothing that can be done. Another step could be to file for the court to seize the tangible properties from inside their house, but again, the court cannot track anyone down if they flee their house or change their address.

In total, there are seven official legal steps that one could take to get the noncustodial parent to pay up, but there is a way out of each of them.

“Protesting outside your ex-husband’s house is difficult and even terrorizing,” said Kim. “But we do it, because it’s the only thing we can do. If anyone says that they are going to hold a protest, we make time to help each other out.”

One way that a number of divorced parents have resorted to is listing their uncooperative ex-spouses on a website called Bad Fathers. The website, which was founded in July 2018, shows the list of “bad parents” who refuse to pay child support for their children. Their name, picture, date of birth, region and other useful information for people to recognize them are posted on the site. There are currently 59 “bad fathers,” nine “bad mothers” and 14 “bad Kopino fathers” on the site. 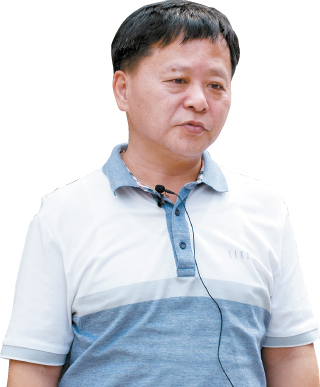 While the managers of the site stay anonymous, Koo Bon-chang, 56, is the public face of Bad Fathers. He helps parents list the names of their uncooperative former spouses and assists with protests. As a result, Koo had been reported by 15 people listed on the website for defamation and was charged with a 5 million won ($4,330) fine in May. The Korea Communications Commission did not shut down the site, however, stating that “its benefit to the public is bigger than the damage inflicted onto each individual.”

Koo founded another site called Kopino Father in 2015 to find Korean fathers who desert their Filipino child and wife. According to Koo, although it is technically illegal to post someone else’s personal information online without their permission, it’s perhaps the only way.

“We have had around 300 bad parents who have been reported to the site,” said Koo. “Of that number, 100 people have reached out to say that they will pay if we erase their names from the list. We try calling them before we actually post their names. And we’ve had about 40 cases solved just by telling them that we are going to post their names on the site. It’s called Bad Fathers because four out of five people who don’t pay [child support] for their children are men.”

According to a survey conducted by the Ministry of Gender Equality and Family last year, 1.53 million households, or 7.5 percent of all households in the country, are single-parent households. In a survey of 2,500 single-parent households conducted by the gender ministry, 73.1 percent answered that they have “never been given child support” from their ex-spouses since their divorce. While 5.7 percent said that they were paid for a period but had not received any money recently, only 15.2 percent were receiving regular support from the other parent.

“There are regulations that are supposed to help people receive their money, but it’s practically of no use,” said Jung Yu-jung, president of the civil organization Child Support Solution Organization. “There are people you can make pay, whose reputations are crucial in maintaining their jobs. Others, who don’t care, do all they can do evade the law - and it works. And because there’s nothing that can be done, the members [of the organization who have not been paid] resort to risky means like posting the other person’s name on Bad Fathers, or protesting outside of their workplace or homes.”

Jung herself is a mother who has not been paid child support since her divorce 12 years ago. She did not know her ex-husband’s whereabouts until when she registered for a government support program for single parents. “I got a call [from the district office] saying that we were not qualified, because the person obligated to provide financial support to my family - my ex-husband - had seen a rise in his income. That was the first time I had heard news of him,” she said.

The government created a state-run organization called the Child Support Agency in March 2015 after the Act on Enforcing and Supporting Child Support Payment went into effect to “exclusively [support] the enforcement of payment of child support to the custodial parents and [establish] policies for administrative and financial support,” according to Article 4 of the Act. The agency provides various services, such as legal consultations and emergency financial support, and took on 117,000 cases from March 25, 2015 to December 2018.

Yet, the existence of the agency has not made a significant change, as it must function within the confines of the law and there is no way for them to do anything more than provide support and do what many custodial parents have already tried.

“I had such high hopes when the Child Support Agency first opened,” Jung said. “But when I sent them all the papers and files for them to find my husband and make him pay, they actually sent all the papers back to me saying, ‘There’s nothing that can be done.’ I’ve tried everything within the boundaries of the law, and it’s now just up to me to depend on my ex-husband’s conscience to pay us voluntarily.”

Recently, 14 representatives of the National Assembly put forward a bill to amend the Act on Enforcing and Supporting Child Support Payment in order to: seize a noncustodial parents’ drivers’ license if they do not pay their court-ordered child support; prohibit them from leaving the country; make the names of the parents public; and enforce criminal punishment. The bill has yet not been passed.

“There are regulations regarding these situations, but they are not without their limitations,” said Lee Eun-yeong, an attorney at Soongin LLC. “For instance, if the indebted person avoids the court’s [letter] delivery, or they earn less than the legal amount of money that can be seized, then the court cannot force them to do any more than that. That is why people are calling for the government to reveal the names of those people who intentionally evade their duties, like the way they do with business owners who do not pay their employees or execute criminal punishments.”

Lee added, “Unlike other types of debts, child support is directly linked to the children’s rights to survival, and thus should be treated differently.”

Koo appealed the prosecutor’s decision made in May and he is still awaiting the date of his hearing.

“It’s going to be a hearing that will put two rights against each other - the childrens’ right to survival and the parents’ reputation,” Koo said. “Those who report me for defamation obviously put their reputation as individuals first. But this is a case in which the child’s right to life should be put first […] I actually hope to shut down the Bad Fathers website. I hope that the bill is passed, so that there is no reason for it to be there. That way, we will all be happy.”

Kim, a custodial mother, added, “This isn’t about my rights. Couples can break up for whatever reason. But regardless of everything, children need to be taken care of by their parents. I do my part as a mother, but he’s not doing his. They need their fathers’ care and it’s their right.”